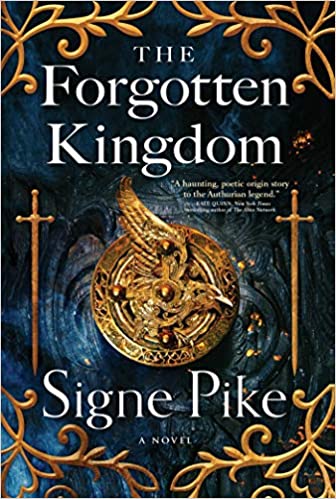 About The Forgotten Kingdom:

AD 573. Imprisoned in her chamber, Languoreth awaits news in torment. Her husband and son have ridden off to wage war against her brother, Lailoken. She doesn’t yet know that her young daughter, Angharad, who was training with Lailoken to become a Wisdom Keeper, has been lost in the chaos. As one of the bloodiest battles of early medieval Scottish history scatters its survivors to the wind, Lailoken and his men must flee to exile in the mountains of the Lowlands, while nine-year-old Angharad must summon all Lailoken has taught her and follow her own destiny through the mysterious, mystical land of the Picts.

In the aftermath of the battle, old political alliances unravel, opening the way for the ambitious adherents of the new religion: Christianity. Lailoken is half-mad with battle sickness, and Languoreth must hide her allegiance to the Old Way to survive her marriage to the next Christian king of Strathclyde. Worst yet, the new King of the Angles is bent on expanding his kingdom at any cost. Now the exiled Lailoken, with the help of a young warrior named Artur, may be the only man who can bring the Christians and the pagans together to defeat the encroaching Angles. But to do so, he must claim the role that will forever transform him. He must become the man known to history as “Myrddin.”

Bitter rivalries are ignited, lost loves are found, new loves are born, and old enemies come face-to-face with their reckoning in this compellingly fresh look at one of the most enduring legends of all time.

Signe Pike is the author of The Lost Queen and the travel memoir Faery Tale, and has researched and written about Celtic history and folklore for more than a decade. Visit her at SignePike.com.

Let’s start with the information that I read a 496 page book in one day.  I took time off to make cinnamon buns and cook dinner but it was hard to break away because once I fell into this story it was incredibly hard to pull myself out. The Forgotten Kingdom picks up where the The Lost Queen left off with the husband of Languoreth riding off to war against the forces of her brother Lailoken and the Pendragon. War is never pretty and the battle scenes are brutal and descriptive.

This volume more tells the story of Langureth’s daughter, Angharad as she is lost in the midst of battle and ends up lost in the woods with only her nursemaid to keep her safe. As they try to find the safety of Angharad’s father’s (Rhydderch) troops they run into danger before they find safety in an unexpected place. She was going into training to become a Priestess in the old ways but the war interfered, now she has found a sanctuary and quarter to develop her gifts.

It’s also the story of Lailoken and his efforts to survive the war with his brother in law with the few men that were able to escape with him, including the new Pendragon. They have been able to survive thanks to the help of a man called the Archer and his people. Lailoken knows this life is unsustainable but for now he is biding his time. He goes on a mystical journey and has a vision of the future that disturbs him – will it come to pass? What he doesn’t know is that his niece has the same vision. War is coming but war with whom and who will lead and who will survive? Will Lailoken, Lanureth and Angharad find their destinies? This book also introduces a character named Artur – a man who will be king someday.

It is just so well written that you get lost in the story from the richly developed characters to the descriptions of time and place. When Ms. Pike describes walking in the woods you are walking with the characters because she brings the forest alive. Her research is evident in the way village life and noble life come alive. I was still thinking about the book two days after I finished it and I can’t wait for the the final book of the trilogy to arrive but I will have to as it’s not due until 2023! The wait is understandable given the amount of detail written into each of these novels. Each has been exciting, involving, and thought provoking. It’s also exciting to enter a world about characters I’ve read about so many times before (Arthur and Merlin) without knowing their origin stories. For all myths are grounded in truth somewhere along he way.