I cannot thank Caitlin Hamilton Summie enough for introducing me to Ann Weisgarber’s books.  The Glovemaker will be my third and to say I am anxiously awaiting the fourth is an understatement. Each one is trip back in time to a tiny piece of American history full of raw emotion and compelling characters. 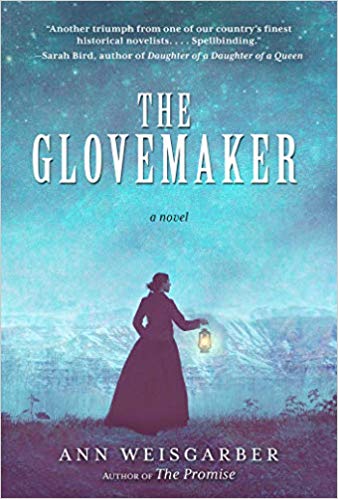 In the inhospitable lands of the Utah Territory, during the winter of 1888, thirty-seven-year-old Deborah Tyler waits for her husband, Samuel, to return home from his travels as a wheelwright. It is now the depths of winter, Samuel is weeks overdue, and Deborah is getting worried.

Deborah lives in Junction, a tiny town of seven Mormon families scattered along the floor of a canyon, and she earns her living by tending orchards and making work gloves. Isolated by the red-rock cliffs that surround the town, she and her neighbors live apart from the outside world, even regarded with suspicion by the Mormon faithful who question the depth of their belief.

When a desperate stranger who is pursued by a Federal Marshal shows up on her doorstep seeking refuge, it sets in motion a chain of events that will turn her life upside down. The man, a devout Mormon, is on the run from the US government, which has ruled the practice of polygamy to be a felony. Although Deborah is not devout and doesn’t subscribe to polygamy, she is distrustful of non-Mormons with their long tradition of persecuting believers of her wider faith.

But all is not what it seems, and when the Marshal is critically injured, Deborah and her husband’s best friend, Nels Anderson, are faced with life and death decisions that question their faith, humanity, and both of their futures.

Ann is the author of The Glovemaker, The Promise and The Personal History of Rachel DuPree. For Rachel Dupree she was nominated for England’s 2009 Orange Prize and for the 2009 Orange Award for New Writers. In the United States, she won the Stephen Turner Award for New Fiction and the Langum Prize for American Historical Fiction. She was shortlisted for the Ohioana Book Award and was a Barnes and Noble Discover New Writer. For The Promise Ann was shortlisted for the Walter Scott Prize for Historical Fiction and a finalist for the Spur Award for Best Western Historical Fiction. She was also a finalist for the Ohioana Book Award for Fiction.

The Glovemaker takes place in the Utah Territory in 1888 and revolves around the small Mormon settlement of Junction which is today located in Capitol Reef National Park. The Promise takes place in Galveston, Texas, during the time of the historic 1900 Storm that killed thousands. Ann was inspired by an abandoned, dilapidated house on the rural end of Galveston and by an interview she conducted when writing an article for a local magazine. Her debut novel, The Personal History of Rachel DuPree, takes place in the South Dakota Badlands during 1917. It was inspired by a photograph of an unknown woman sitting in front of a sod dugout.

Ann was born and raised in Kettering, Ohio, a suburb of Dayton. She graduated from Wright State University in Dayton with a Bachelor of Arts in Social Work and earned a Master of Arts in Sociology from the University of Houston. She has been a social worker in psychiatric and nursing home facilities, and taught sociology at Wharton County Junior College in Texas.

In addition to Ohio and Texas, Ann has lived in Cambridge, Massachusetts, and Des Moines, Iowa. She now lives in Galveston, Texas. She and her husband, Rob, are fans of America’s national parks and visit at least one park a year. Ann is currently working on her next novel that takes place during 1945 in a German POW camp located in Central Texas.

Deborah is a woman living in Utah territory with her husband Samuel, a wheelwright. He leaves every year to travel to different parts of the territory to help repair wagon wheels and other things for people in various Mormon towns. For Deborah and Samuel are members of the Latter Day Saints but they, like most of the other members of their town of Junction don’t believe in plural marriage. The country at the time is very much up in arms about the Latter Day Saints, the religion they don’t understand and in particular polygamy.

The town of junction is full of Saints that are not quite so committed to the Church but are still believers. Only one family has a plural marriage, the other married couples are just one man/one woman. But Samuel, Deborah and their neighbor Nels will still help their fellow Mormans – when polygamists are being chased for breaking the law they come through the town of Junction and through a series of steps are helped to safety. But one night, in January – which is the wrong time of year for someone to be trying to cross the territory due to the weather – a man comes to Deborah’s door. Samuel is late back from his usual circuit. There was a rockslide on the route so Nels has said it would take him 6 weeks longer to get home. Deborah is counting the days awaiting his return.

The man that arrives gives all the right phrases but he still makes her uneasy. Deborah just wants him to get on his way. But trouble is soon to follow as a Federal Marshal soon shows up looking for the man. From there life gets complicated for all the inhabitants of Junction.

This is not a long book (312 pages) but there is a lot of story packed into those pages. This is my third book by Ms. Weisgarber and I love how she takes a relatively unknown piece of history and weaves such a rich and detailed story. The Glovemaker doesn’t cover an expansive period of time and the issues it discusses are not widely known outside of Morman history. That’s what makes her books so fascinating – they open windows to America’s past but not in big and booming ways but rather through tales of strong women.

This was a book that pulled me in from the beginning. The descriptions of the territory and its cold isolation in the winter months had me shivering. The fear Deborah felt was palpable and her love and concern for her husband really came through – not to mention her anger at him for leaving her for so long every year so he could travel and explore. She understood on one level it was his work but she also knew it was more than work for him.

In reading the Glovemaker I found myself quite surprised when the book ended as I had become so immersed in the lives of the people of Junction. I didn’t want to leave. I did read the book in one sitting with just a slight break in between for a doctor’s appointment. I’m keeping it for a second read at another time for I suspect that it will only improve in time. And I will anxiously await Ms. Weisgarber’s next book.