This tale of a man newly working for the CIA married to a woman he really doesn’t know all that well living in post WWII Italy sounded interesting. I thank St. Martin’s Press for sending me a copy of The Italian Party by Christina Lynch at no charge for my honest review. 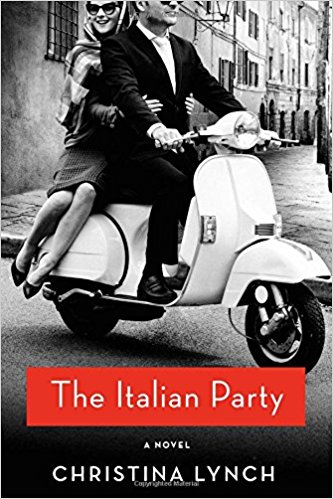 About The Italian Party:

Newly married, Scottie and Michael are seduced by Tuscany’s famous beauty. But the secrets they are keeping from each other force them beneath the splendid surface to a more complex view of ltaly, America and each other.

When Scottie’s Italian teacher―a teenager with secrets of his own―disappears, her search for him leads her to discover other, darker truths about herself, her husband and her country. Michael’s dedication to saving the world from communism crumbles as he begins to see that he is a pawn in a much different game. Driven apart by lies, Michael and Scottie must find their way through a maze of history, memory, hate and love to a new kind of complicated truth.

Half glamorous fun, half an examination of America’s role in the world, and filled with sun-dappled pasta lunches, prosecco, charming spies and horse racing, The Italian Party is a smart pleasure.

Christina Lynch’s picaresque journey includes chapters in Chicago and at Harvard, where she was an editor on the Harvard Lampoon. She was the Milan correspondent for W magazine and Women’s Wear Daily, and disappeared for four years in Tuscany. In L.A. she was on the writing staff of Unhappily Ever After; Encore, Encore; The Dead Zone and Wildfire. She now lives in the foothills of the Sierra Nevada. She is the co-author of two novels under the pen name Magnus Flyte. She teaches at College of the Sequoias. The Italian Party is her debut novel under her own name.

I’ve taken myself off of reading WWII novels because I overdosed but as this book took place AFTER the war and I wouldn’t have to deal with Nazis but rather Communists I figured I’d be OK. And truth be told the Communists hardly appear in the book at all. Michael and Scottie have to moved to Sienna to ostensibly open a Ford tractor agency. They are newly married and both are keeping deep secrets from the other.

There is much going on; Michael is a CIA agent and hasn’t told Scottie. Scottie isn’t a rich heiress as Michael expected since he met her as Vassar. Michael is not able or willing to embrace Italy and Scottie wants to immerse herself in the culture. As Michael embarks on his mission to keep the Communist candidate from winning the election for mayor and Scottie tries to find a lost boy they seem to be at cross purposes – each not realizing what the other can do to help the other. Until Michael realizes what an asset his wife can be.

I’m very mixed on this book. It had so much going for it; a great story line, intriguing characters and a location that would have anyone dreaming of never wanting to leave – even if only in the pages of a book. But it seemed at times that the characters were cardboard cutouts performing set tasks. There is so very little emotion even when dealing with lies and betrayal on both sides. It leaves the reader at a remove – rather as if you are observing the story than being immersed in it.

It is certainly an interesting period in history to revisit, particularly with Russia so much in the news lately. It seems the same fears that drove the first Cold War are coming around in a different incarnation to start a second one. Michael’s wholesale panic about the possible arrival of Communism on the shores of the USA shows how people reacted to the threat at the time.

The Italian Party has many ancillary story lines and perhaps that is part of what has me torn on this book. In trying to show the flavor of the citizens of Sienna and their quirks perhaps Ms. Lynch just offered too many stories that perhaps tied together but really didn’t bind.