I discovered Jane Austen’s books late in life and loved them. I was thrilled when St. Martin’s Press sent me a copy of The Jane Austin Society by Natalie Jenner at no charge for my honest review. 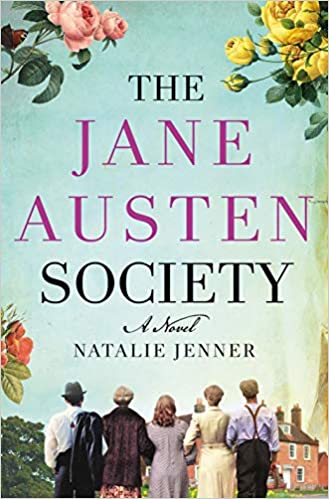 About The Jane Austen Society:

Just after the Second World War, in the small English village of Chawton, an unusual but like-minded group of people band together to attempt something remarkable.

One hundred and fifty years ago, Chawton was the final home of Jane Austen, one of England’s finest novelists. Now it’s home to a few distant relatives and their diminishing estate. With the last bit of Austen’s legacy threatened, a group of disparate individuals come together to preserve both Jane Austen’s home and her legacy. These people―a laborer, a young widow, the local doctor, and a movie star, among others―could not be more different and yet they are united in their love for the works and words of Austen. As each of them endures their own quiet struggle with loss and trauma, some from the recent war, others from more distant tragedies, they rally together to create the Jane Austen Society.

A powerful and moving novel that explores the tragedies and triumphs of life, both large and small, and the universal humanity in us all, Natalie Jenner’s The Jane Austen Society is destined to resonate with readers for years to come.

Natalie Jenner is the author of THE JANE AUSTEN SOCIETY (St. Martin’s Press, May 2020), a fictional telling of the start of the society in the 1940s in the village of Chawton, where Austen wrote or revised her major works. Born in England and raised in Canada, Natalie graduated from the University of Toronto with degrees in English Literature and Law, and has worked for decades in the legal industry. She recently founded the independent bookstore Archetype Books in Oakville, Ontario, where she lives with her family and two rescue dogs.

I was charmed by this book from the first pages. It’s not a fast paced book, nor is it what I would call a passionate book. It rolls along rather like life in the small English village in which it takes place. The book takes place after WWII (with some flashbacks) in the village where Jane Austen wrote her novels. People come to see where the famous author lived and are often disappointed that the villagers are not as excited as they are that they abide in the town where such greatness was created.

The town is inhabited by a number of different characters each one loving or coming to love the novels of Jane Austen. They are all also suffering from the aftereffects of the War with some families having lost sons, fathers, husbands. The town doctor is a widower having lost his wife to an at home accident and he suffers a level of guilt that he could not save her.

There is a subplot with an American actress who is obsessed with Jane Austen who collects memorabilia. She ends up becoming a member of the society through her love of Austen.

As some of the town folk start to come together to preserve the memory of and remaining history left from Ms. Austen’s stay they form the Jane Austen Society. It helps to heal individuals and the whole village as they work to celebrate the woman who wrote about relationships in such a down to earth way.

This was a lovely read for the most part. There is a discordant arc with the American actress that takes a dark, turn that seems very out of place from the rest of the tale. Other than that the story rolls along with some delightful twists and turns that make small town reading worth the time.

There are many references to the various Austen works in the book. It has been a very long time since I last read any of her novels but I didn’t feel at a loss. I do think a working knowledge of the various characters and the books will be helpful but is not a deal breaker to enjoy the book. But I suspect that anyone who chooses this title will be a Jane Austen fan.

ANY PURCHASE LINKS ARE AFFILIATE LINKS WHICH MEANS THAT IF YOU BUY SOMETHING I RECEIVE A SMALL COMMISSION AT NO ADDITIONAL CHARGE TO YOU.