The Lost History of Dreams by Kris Waldherr – Book Review

I had been seeing review after review for The Lost History of Dreams by Kris Waldherr and I was very intrigued so when I was offered a free copy for my honest review by the publisher I said yes very quickly. 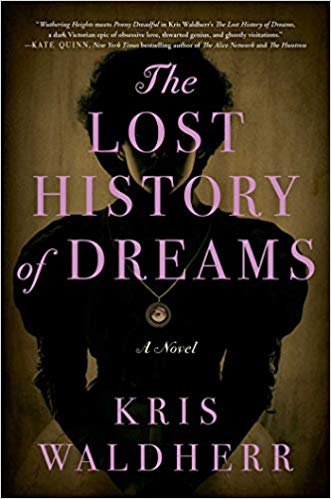 About The Lost History of Dreams:

A post-mortem photographer unearths dark secrets of the past that may hold the key to his future, in this captivating debut novel in the gothic tradition of Wuthering Heights and The Thirteenth Tale.

All love stories are ghost stories in disguise.

When famed Byronesque poet Hugh de Bonne is discovered dead of a heart attack in his bath one morning, his cousin Robert Highstead, a historian turned post-mortem photographer, is charged with a simple task: transport Hugh’s remains for burial in a chapel. This chapel, a stained glass folly set on the moors of Shropshire, was built by de Bonne sixteen years earlier to house the remains of his beloved wife and muse, Ada. Since then, the chapel has been locked and abandoned, a pilgrimage site for the rabid fans of de Bonne’s last book, The Lost History of Dreams.

However, Ada’s grief-stricken niece refuses to open the glass chapel for Robert unless he agrees to her bargain: before he can lay Hugh to rest, Robert must record Isabelle’s story of Ada and Hugh’s ill-fated marriage over the course of five nights.

As the mystery of Ada and Hugh’s relationship unfolds, so does the secret behind Robert’s own marriage—including that of his fragile wife, Sida, who has not been the same since the tragic accident three years ago, and the origins of his own morbid profession that has him seeing things he shouldn’t—things from beyond the grave.

Kris Waldherr effortlessly spins a sweeping and atmospheric gothic mystery about love and loss that blurs the line between the past and the present, truth and fiction, and ultimately, life and death.

Kris Waldherr is an award-winning author, illustrator, and designer. She is a member of the Historical Novel Society, and her fiction has been awarded with fellowships by the Virginia Center of the Creative Arts and a reading grant by Poets & Writers. Kris Waldherr works and lives in Brooklyn in a Victorian-era house with her husband, the anthropologist-curator Thomas Ross Miller, and their young daughter.

The History of Lost Dreams is a book about love, loss, mourning, madness and ghosts. As one of the main characters states, “all love stories are ghost stories in disguise.” There are several ghosts running through the pages of this book but the reader has to decide which ones are real.

Robert Highstead is making his living by taking daguerreotypes of the dead. He feels he is helping people by leaving them with a last image of their loved ones. He came to this job in an unconventional way, but he found he had a talent for it.

Robert receives notice from his brother that his skills are needed in the service of a long lost family member. A cousin that neither one of them really knew has died and his last bequest is that he be laid to rest in a stained glass folly on his lands. Hugh de Bonne was a poet of some renown and when his wife died he built the beautiful glass chapel for her and he wants to be laid to rest next to her. He also requested a daguerreotype of himself in his coffin with his wife’s niece standing beside.

There is only one problem – the niece, Isabelle has sworn to never open the chapel. She is living on the estate of her Aunt who was Hugh’s wife and it’s become a place of pilgrimage for the readers of his poetry, in particular his last work – The History of Lost Dreams. They come wanting to know Hugh and wallow in his love for Ada and their lost child.

But all love stories are ghost stories.

Robert has come to try and convince Isabelle to open the folly so he can photograph his cousin and get back to London. He does not find her amenable to Hugh’s last request. What he finds is a woman who intrigues him, fascinates him and scares him. For he fears if he thinks too much about her he will lose his connection with his wife.

Isabelle offers him a deal – listen to her tell her Aunt’s story of 5 nights and transcribe it so it can be told and then she will open the folly. What follows is a ghost’s story of love and obsession that Robert feels all too closely.

I found myself drawn in from the first page. The History of Lost Dreams is a little bit creepy as a gothic novel should be. The skill in writing a good gothic novel is knowing when to be creepy and how creepy to be. Ms. Waldherr does it well. She also hides her character’s secrets under layers and layers so that you end up wondering what is real and what is not. I believe it’s a book that will be even better upon a second reading. There is just so much here; from the characters themselves to the overall atmosphere pervading the telling of their sad tales.

It’s a great book for a rainy afternoon, with a cat (or bunny) in your lap. Add a hot cup of tea or cocoa and you will be set for an experience.