I have been reading the Father Mateo and Hiro Hattori series from Susan Spann almost since the first book. Trial on Mount Koya is the latest adventure for these two intrepid friends. I thank Historical Fiction Virtual Book Tours for sending me a free copy at no charge for my honest review. 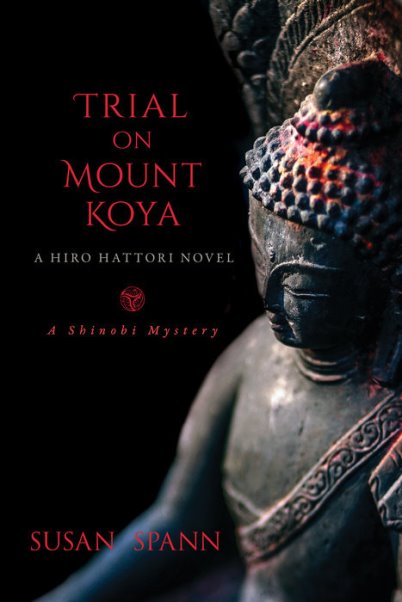 About Trial on Mount Koya:

Master ninja Hiro Hattori and Jesuit Father Mateo head up to Mount Koya, only to find themselves embroiled in yet another mystery, this time in a Shingon Buddhist temple atop one of Japan’s most sacred peaks.

November, 1565: Master ninja Hiro Hattori and Portuguese Jesuit Father Mateo travel to a Buddhist temple at the summit of Mount Koya, carrying a secret message for an Iga spy posing as a priest on the sacred mountain. When a snowstorm strikes the peak, a killer begins murdering the temple’s priests and posing them as Buddhist judges of the afterlife–the Kings of Hell. Hiro and Father Mateo must unravel the mystery before the remaining priests–including Father Mateo–become unwilling members of the killer’s grisly council of the dead.

Susan began reading precociously and voraciously from her preschool days in Santa Monica, California, and as a child read everything from National Geographic to Agatha Christie. In high school, she once turned a short-story assignment into a full-length fantasy novel (which, fortunately, will never see the light of day).

A yearning to experience different cultures sent Susan to Tufts University in Boston, where she immersed herself in the history and culture of China and Japan. After earning an undergraduate degree in Asian Studies, Susan diverted to law school. She returned to California to practice law, where her continuing love of books has led her to specialize in intellectual property, business and publishing contracts.

Susan’s interest in Japanese history, martial arts, and mystery inspired her to write the Shinobi Mystery series featuring Hiro Hattori, a sixteenth-century ninja who brings murderers to justice with the help of Father Mateo, a Portuguese Jesuit priest.

Susan is the 2015 Rocky Mountain Fiction Writers’ Writer of the Year, a former president of the Northern California Chapter of Mystery Writers of America and a member of Mystery Writers of America, Sisters in Crime (National and Sacramento chapters), the Historical Novel Society, and the Rocky Mountain Fiction Writers. She is represented by literary agent Sandra Bond of Bond Literary Agency.

When not writing or representing clients, Susan enjoys traditional archery, martial arts, photography, and hiking. She lives in Sacramento with her husband and two cats, and travels to Japan on a regular basis.

Hiro Hattori and Father Mateo have climbed to the temple of the Shingon Buddhist Temple on Mount Koya as the weather starts to turn for the worse. They are there so Hiro can deliver a message to a warrior priest from his clan so he can warn other agents of the trouble brewing in the country as they await the appointment of a new Shogun. They expect it to be a simple, restful visit but as is often the case with these two, life does not offer what they expect.

Soon the priests of the temple are being murdered in a symbolic manner that concerns Hiro as he feels that Father Mateo will soon be the next on the list and he is sworn to protect him. They must work to figure out who is doing the killings – one of the priests? a visiting pilgrim who is not what he seems? a female samurai who presence is also questionable? Someone is on a killing spree and they are all stuck on the mountain due to a snow storm.

I believe this is my fifth adventure with these two characters so they are quite familiar. Each year I very much look forward to my foray into 16th century Japan with Hiro Hattori, Father Matteo, Ana and Gato. It’s like catching up with old friends – but in a different century and people die. There is a certain comfort in the familiarity of a series like this; you know the characters and you can’t wait to “go out” with them again. Ms. Spann does not disappoint with this latest installment. The location is exotic, the mystery twisty and the banter between the two men is entertaining.

There was a bit less fighting for Hiro in this tale and bit more reflection. I think it was good for him as he did suffer a deep loss in the preceding book. He needed a bit of a kick in the pants to remind him that life goes on despite great sorrow. I shall very much look forward to next year’s journey for these two.

For my thoughts on the other books in the Shinobi series  you can read my reviews: BETRAYAL AT IGA, BLADE OF THE SAMURAI, FLASK OF THE DRUNKEN MASTER. THE NINJA’S DAUGHTER