I don’t read many detective type novels these days and I just try to avoid murder and mayhem but I just love the Clive and Henrietta series! I thank Michelle Cox for sending me the latest book featuring these two, A Child lost at no charge for my honest review. 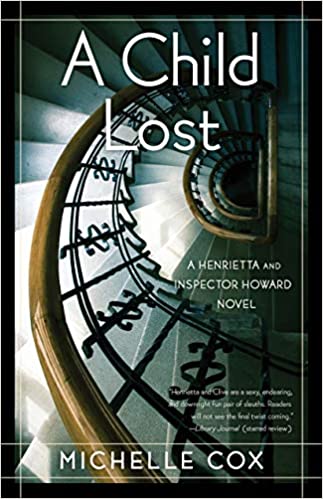 About A Child Lost:

A spiritualist, an insane asylum, a lost little girl . . .

When Clive, anxious to distract a depressed Henrietta, begs Sergeant Frank Davis for a case, he is assigned to investigating a seemingly boring affair: a spiritualist woman operating in an abandoned schoolhouse on the edge of town who is suspected of robbing people of their valuables. What begins as an open and shut case becomes more complicated, however, when Henrietta―much to Clive’s dismay―begins to believe the spiritualist’s strange ramblings.

Meanwhile, Elsie begs Clive and Henrietta to help her and the object of her budding love, Gunther, locate the whereabouts of one Liesel Klinkhammer, the German woman Gunther has traveled to America to find and the mother of the little girl, Anna, whom he has brought along with him. The search leads them to Dunning Asylum, where they discover some terrible truths about Liesel. When the child, Anna, is herself mistakenly admitted to the asylum after an epileptic fit, Clive and Henrietta return to Dunning to retrieve her. This time, however, Henrietta begins to suspect that something darker may be happening. When Clive doesn’t believe her, she decides to take matters into her own hands . . . with horrifying results.

Michelle Cox is the author of the multiple award-winning Henrietta and Inspector Howard series as well as Novel Notes of Local Lore, a weekly blog dedicated to Chicago’s forgotten residents. She suspects she may have once lived in the 1930s and, having yet to discover a handy time machine lying around, has resorted to writing about the era as a way of getting herself back there. (Her books have been praised by Kirkus, Library Journal, Publishers Weekly, Booklist, and many others, so she might be on to something.) Unbeknownst to most, Cox hoards board games she doesn’t have time to play and is, not surprisingly, addicted to period dramas and big band music. Also, marmalade.

A Child Lost is my fourth Henrietta and Inspector Clive novel and like the three before it did not disappoint. The book opens with Henrietta’s sister Elise trying to sort out the mystery of the young girl at the house of the man she has come to care for – especially as this young girl calls him papa. As she finds out the history it seems that she might need help from her sister and brother in law to get to the truth.

Clive is very worried about Henrietta as she is not recovering from her miscarriage and he is concerned she will never smile again. Perhaps a case will divert her so when one is offered he happily accepts even though he feels it’s nothing really worth investigating. She is a little skeptical about the case he comes up with but she is very taken with her sister’s problem – especially as it concerns a child.

As Clive and Henrietta try and figure out what has happened to the young girl’s mother they find themselves learning more about how the women who are sent to insane asylums are treated than they really might care to. When the young girl, who suffers from epilepsy is then also sent to the insane asylum Henrietta  acts a bit recklessly in investigating her suspicions about what might be occuring in that dark place.

A Child Lost is a multi-layered title in that Henrietta is mourning her lost child, she and Clive are trying to find the right home for the child that Elsie is concerned for and Henrietta is a bit of a lost child herself. This plays into that supposed psychic whose story does not wrap up in this book but only leaves the reader with questions which I suspect will be answered in the next.

As with the previous books, A Veil Removed, A Promise Given and A Ring of Truth, I was turning the pages wondering what was going to happen next. Clive and Henrietta are such unique and wonderful characters. Their relationship is a delight to read and I look forward to each installment of their adventures. The mystery is always a good one with lots of twists and turns. The conflict between Clive’s rich family and Henrietta’s wrong side of the tracks family makes for good reading. Overall if you would like a good mystery tale with great characters this is the book for you. Even though it’s part of a series it can stand alone. But do yourself a favor and read them all – they’re worth it.