A Farm Cat Farewell – We Say Goodbye to Stinky

Today’s post is a sad one. Stinky the Farm cat is leaving the farm. She hasn’t been feeling well lately; she had an upper respiratory infection. She got through it but Stinky is an old cat and she had been a little off before it hit. I could just tell she wasn’t a happy cat – anyone with animals will understand. They let you know when it’s time. She is going to the vet today to head to the Rainbow Bridge. I will miss her. I would like to share the story of her little life, for she was a tiny cat.

Stinky found me in 2003. We were still living in New Jersey at the time – in the fifthwheel. Our house had sold much more quickly than we expected it to so we just moved into the trailer and moved the trailer into a trailer park. Stinky wandered into our site one night looking half starved and with a collar on that was so tight it was cutting into her neck. No one in the park laid claim to her so we did.

Her name was not originally Stinky, it was Threesa – as in Three’s a Crowd as she was then the third cat in the trailer. But it soon became evident that Stinky was a more appropriate name as you KNEW when she was in the litter box. In a 400 square foot trailer this was challenging but still we loved her.

She was a tiny little thing when she found us which is why we thought she was a kitten but no, she was an adult cat. Stinky never grew very big. Anyone who met her in person was always surprised at how tiny she was. At her biggest she only ever weighed 7lbs. 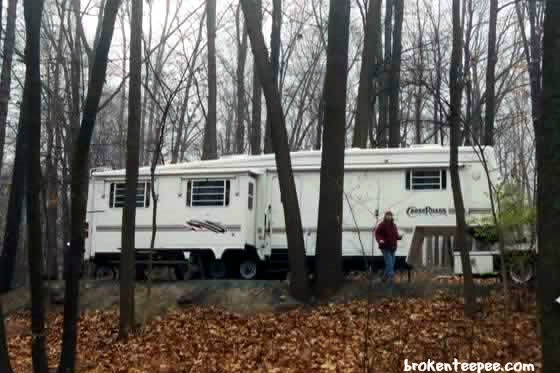 Stinky took very well to traveling. The only time we had the slightest problem with her was when we were in Mississippi. She would not stay in the trailer. She kept escaping! But all she wanted to do is sit and watch the Mississippi River. She didn’t run away, she didn’t really even go far – she just sat on the deck of the Freightliner that pulled the trailer. She just wanted to watch the water go by! Silly girl.

When we packed up the trailer to go from place to place the other two cats who were with us would hide but Stinky would sit on the back of the sofa and watch traffic. I know it made people look twice. 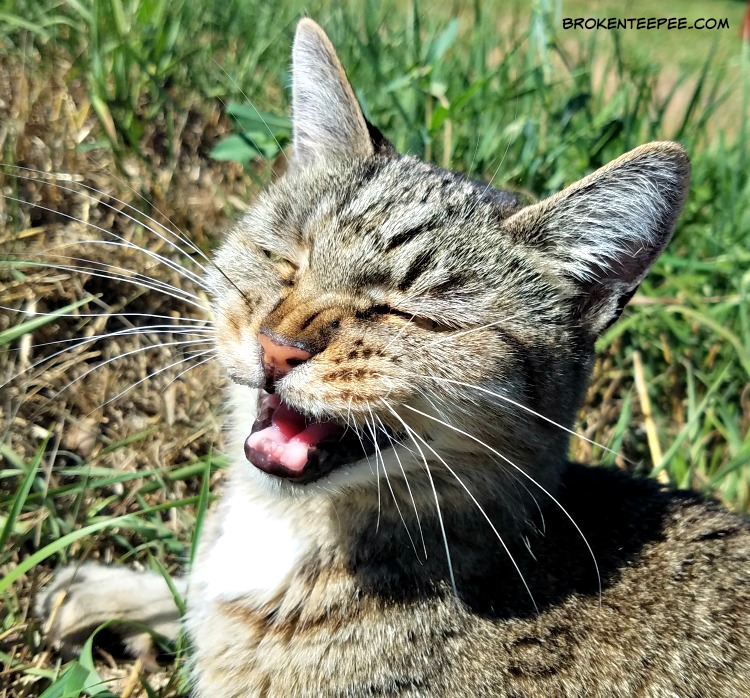 After we traveled about for three years we then settled down on our little piece of paradise here in Montana where Stinky became an official Farm Cat. She soon was able to roam around a big piece of land but it came with some….hazards. 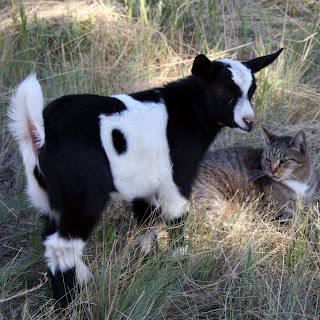 Stinky had to learn to deal with goats. She inspired one of Pricilla’s favorite posts on her blog, When Harry Met Stinky. There were also chickens to learn to avoid and then ducks. She learned to find a sleeping place in the sun all her own.

I don’t know exactly how old Stinky is. She has lived with us for 15 years and all the vet could tell me when we brought her in when we first found her was that she was an adult cat. So she is at least 16 and possibly a year or two older. We strongly suspect she was abused because she was always a little afraid of men and very, very, very wary of feet. Any time one of us would get too close to her with a foot she would cower and cringe. It made us sad that she still did this even after all of the years of living in spoiled comfort. But I guess she never forgot what ever was done to her. That just makes me sad. 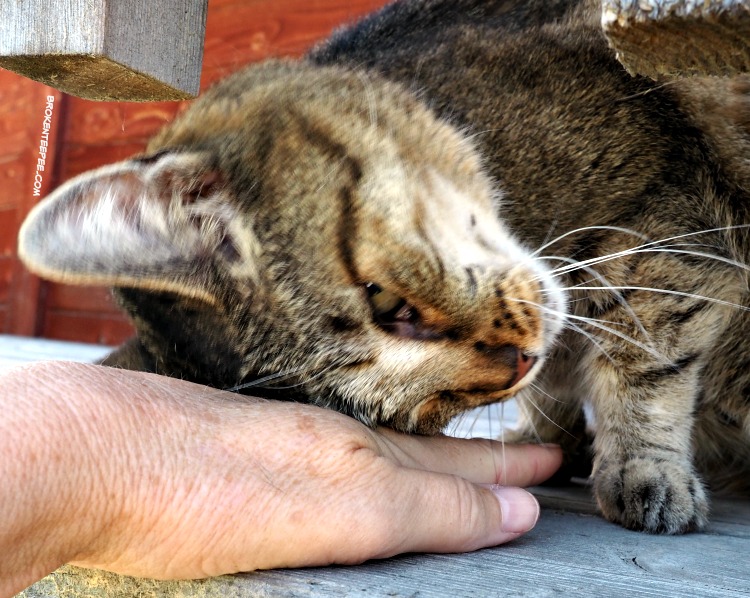 I do know that she did have a very good life while she was with us as I spoil all of my cats terribly. She was very affectionate and would often sit in my lap. Until the last 6 months she always slept with me, right by my head. She had not been able to make the climb lately. She has spent most of her days and nights sleeping on the chair in the sun or on her heated sleeping pad.

She has not been herself. I can see it. It’s there in her eyes – it’s time. 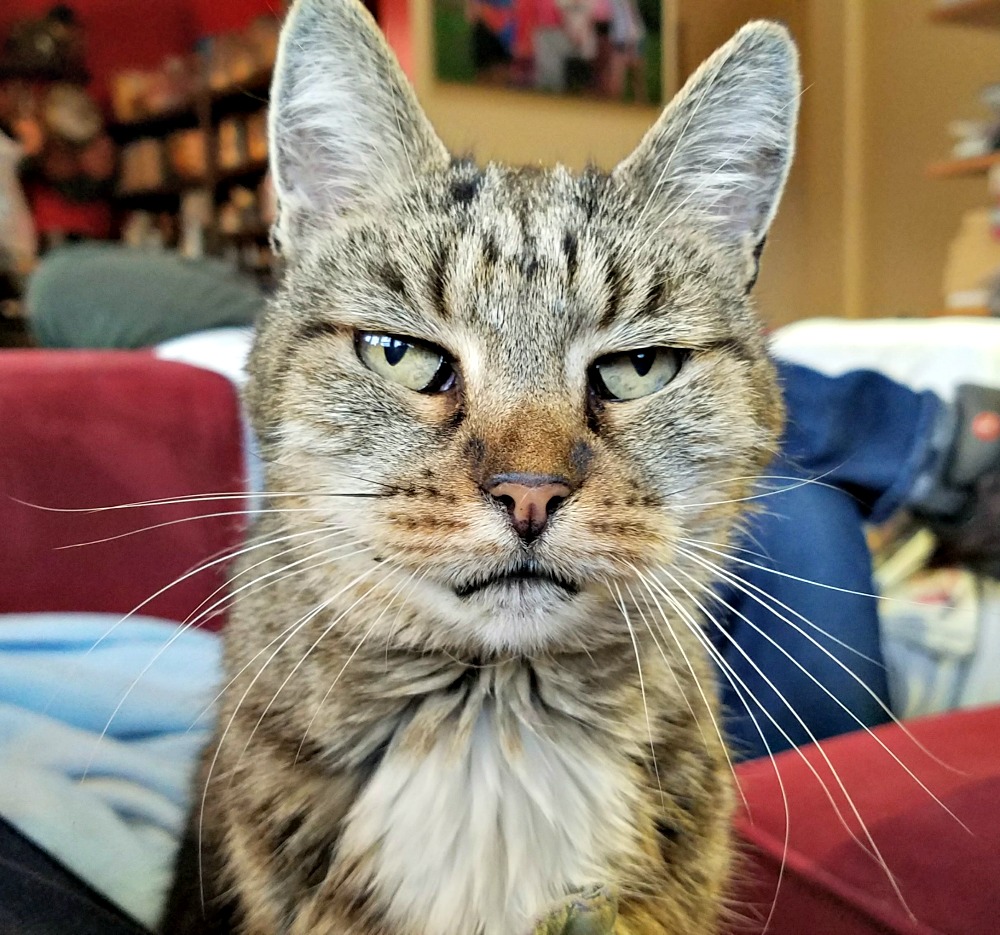 I will miss her looks. She was a master of that look of disdain. Her soft purrs will not be there on the days I don’t feel well. She was always the first cat to cuddle up to me. I don’t want to keep her her for me only to let her suffer.

It’s time. It’s there in her eyes.

Goodbye Stinky. You are missed.