I have long been a fan of Sandra Byrd’s books: my first review of one of her books was in 2011. I was very happy to be sent a copy of her latest, Lady of a Thousand Treasures by TLC Book Tours at no charge for my honest review. 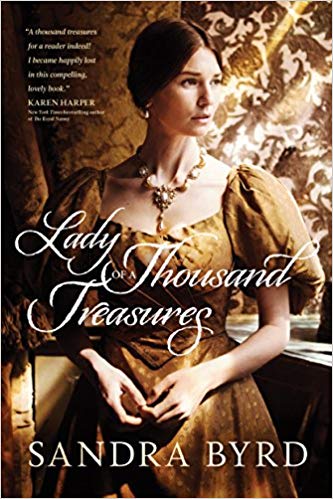 About Lady of a Thousand Treasures:

Miss Eleanor Sheffield is a talented evaluator of antiquities, trained to know the difference between a genuine artifact and a fraud. But with her father’s passing and her uncle’s decline into dementia, the family business is at risk. In the Victorian era, unmarried Eleanor cannot run Sheffield Brothers alone.

The death of a longtime client, Baron Lydney, offers an unexpected complication when Eleanor is appointed the temporary trustee of the baron’s legendary collection. She must choose whether to donate the priceless treasures to a museum or allow them to pass to the baron’s only living son, Harry–the man who broke Eleanor’s heart.

Eleanor distrusts the baron’s motives and her own ability to be unbiased regarding Harry’s future. Harry claims to still love her and Eleanor yearns to believe him, but his mysterious comments and actions fuel her doubts. When she learns an Italian beauty accompanied him on his return to England, her lingering hope for a future with Harry dims.

With the threat of debtor’s prison closing in, Eleanor knows that donating the baron’s collection would win her favor among potential clients, saving Sheffield Brothers. But the more time she spends with Harry, the more her faith in him grows. Might Harry be worthy of his inheritance, and her heart, after all? As pressures mount and time runs out, Eleanor must decide whom she can trust–who in her life is false or true, brass or gold–and what is meant to be treasured.

Sandra Byrd’s first series of historically sound Gothic romances launched with the best-selling Mist of Midnight, which earned a coveted Editor’s Choice Award from the Historical Novel Society. The second book, Bride of a Distant Isle, has been selected by Romantic Times as a Top Pick. The third in the series, A Lady in Disguise, was named by the American Library Association’s Booklist as one of the Top Ten Inspirational Fiction Books of the year.

Her contemporary adult fiction debut, Let Them Eat Cake, was a Christy Award finalist, as was her first historical novel, To Die For: A Novel of Anne Boleyn. To Die For was also named a Library Journal Best Books of the Year Pick, as was The Secret Keeper: A Novel of Kateryn Parr.

Victorian Ladies, a new series, offers its first title, Lady of a Thousand Treasures, in 2018.

This is, I believe my fifth book by Ms. Byrd – I obviously enjoy her writing or I wouldn’t keep coming back every time she wrote another one. Lady of a Thousand Treasures is the start of a new series – Victorian Ladies. The first lady is Miss Eleanor Sheffield, a young woman well educated in antiquities and objets d’art. Her father and uncle have run Sheffield Brothers, a company that sources such items for the nobility and other rich patrons. But now her father had dies and Eleanor is trying to continue on. She has been given a rather large commission but it involves the man she thought she would marry – can she trust herself and more importantly, can she trust him?

There are several plots running through the book war in Venice, the treatment of the poor, women’s rights and the theft and counterfeiting of antiquities from countries at war among others. They all come together with a flirtation and romance between Miss Sheffield and Harry,  Lord Lydney – the man whose father’s death has given her a large commission. But Harry has let her down in the past and his father has given her some information that leads her to believe he has turned bad. While she is trying to figure out if Harry is telling her the truth she is also trying to keep her business afloat – and deal with her uncle who is exhibiting signs of what we now know as Alzheimer’s.

So, as you can see there is a lot going on in this tale and yet it never loses track of the main plot – that of a woman with a task who is not sure she can trust the man she loves. Even though deep down she knows he is everything that she knows to be true. It was a good read and an interesting one. It covered a number of issues that you don’t usually see in books – and I always enjoy these spunky female heroines. Eleanor is an intelligent, educated woman in a time where women were not generally thought to be more than marriage material. I also thoroughly enjoyed all of the discussion about the art objects. For this art history major that was pure delight.

One lucky US reader will win a copy of Lady of a Thousand Treasures. Just enter as many ways as you would like on the Gleam widget below. Full rules are on the widget. Good luck everyone.