As many of you know – as least those of you that have read the story of my brain aneurysm – I’ve had my dealings with brain surgeons. When I saw an ad for Admissions by Henry Marsh I knew I wanted to read it. I was fortunate enough to be sent a copy at no charge for my honest review. 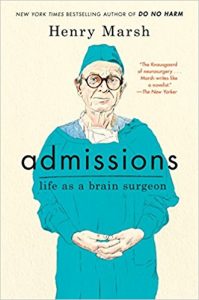 Henry Marsh has spent a lifetime operating on the surgical frontline. There have been exhilarating highs and devastating lows, but his love for the practice of neurosurgery has never wavered.

Following the publication of his celebrated New York Times bestseller Do No Harm, Marsh retired from his full-time job in England to work pro bono in Ukraine and Nepal. In Admissionshe describes the difficulties of working in these troubled, impoverished countries and the further insights it has given him into the practice of medicine.

Marsh also faces up to the burden of responsibility that can come with trying to reduce human suffering. Unearthing memories of his early days as a medical student, and the experiences that shaped him as a young surgeon, he explores the difficulties of a profession that deals in probabilities rather than certainties, and where the overwhelming urge to prolong life can come at a tragic cost for patients and those who love them.

Reflecting on what forty years of handling the human brain has taught him, Marsh finds a different purpose in life as he approaches the end of his professional career and a fresh understanding of what matters to us all in the end.

HENRY MARSH studied medicine at the Royal Free Hospital in London, became a Fellow of the Royal College of Surgeons in 1984 and was appointed Consultant Neurosurgeon at Atkinson Morley’s/St George’s Hospital in London in 1987. He has been the subject of two documentary films, Your Life in Their Hands, which won the Royal Television Society Gold Medal, and The English Surgeon, which won an Emmy, and is the author of the New York Times bestselling memoir Do No Harm. He was made a CBE in 2010.

I did not read Dr. Marsh’s first book. Perhaps if I had I would have been better prepared for this book. I will admit it was not what I was expecting. Having personally had two brain surgeries I find the topic of said somewhat interesting. Back when I was learning of my diagnosis and going through my procedures and recovery the internet was nascent so I didn’t have the access people have today. There was no google. I suppose I was expecting more tales of the neurosurgeon and less tales of the man.

This is not to say that there wasn’t much to read in this volume of essays. I found them at times enthralling at other times downright depressing. I enjoyed Dr. Marsh most when he was focused on trying to make things better for his patients but his ruminations on the state of the British healthcare system were very disturbing. The only thing worse was when he went outside of Britain into countries with lower standards of care.  His stories really make one wonder as to the state of neurosurgery in developing areas.

So, did I like this book? At times yes, at others not so much. When Dr. Marsh was telling stories outside of himself I found the book to be very interesting. The tales of the surgeries were what I was most interested in so I found them to be utterly fascinating and I wished there were more. When Dr. Marsh started in on his insecurities and failings he lost my interest. I respect that this was his book to write but I felt I was failed by the synopsis. Again, had I read the first book I might have know what to expect. This is not to say that Dr. Marsh is a poor writer because he is not. The book is very well written. I feel this was more a failing on my part in looking for more than the book was ever going to give.