I am pleased to share with you today the second book in Donna Russo Morin’s Da Vinci Disciples series, The Competition. The book was sent to me at no charge by the author’s publicist. Read on to learn about the book and see what I thought. 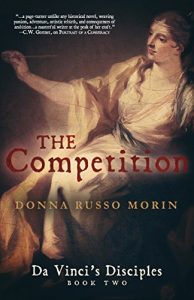 In a studiolo behind a church, six women gather to perform an act that is, at once, restorative, powerful, and illegal. They paint. Under the tutelage of Leonardo da Vinci, these six show talent and drive equal to that of any man, but in Renaissance Florence they must hide their skills, or risk the scorn of the city.

A commission to paint a fresco in Santo Spirito is announced and Florence’s countless artists each seek the fame and glory this lucrative job will provide. Viviana, a noblewoman freed from a terrible marriage and now free to pursue her artistic passions in secret, sees a potential life-altering opportunity for herself and her fellow female artists. The women first speak to Lorenzo de’ Medici himself, and finally, they submit a bid for the right to paint it. And they win.

But the church will not stand for women painting, especially not in a house of worship. The city is not ready to consider women in positions of power, and in Florence, artists wield tremendous power. Even the women themselves are hesitant; the attention they will bring upon themselves will disrupt their families, and could put them in physical danger.

All the while, Viviana grows closer to Sansone, her soldier lover, who is bringing her joy that she never knew with her deceased husband. And fellow-artist Isabetta has her own romantic life to distract her, sparked by Lorenzo himself. Power and passion collide in this sumptuous historical novel of shattering limitations, one brushstroke at a time.

Donna earned two degrees from the University of Rhode Island. In addition to writing, teaching writing, and reviewing for literary journals, Donna works as a model and actor; highlights of her work include two seasons on Showtime’s Brotherhood and an appearance in Martin Scorsese’s The Departed. Donna is the proud mother of two sons, one a future opera singer, the other a future chef.

I thoroughly enjoyed the first book in Ms. Russo’s Da Vinci Disciples series so I was very much looking forward to this follow up volume. I wasn’t disappointed. It follows the group of women artists formed in the first book as they strengthen their bonds and actually go forth and bid on an art project in Florence. This might not sound so controversial to today’s world but in the time period of the Renaissance it was downright revolutionary. Women were supposed to stay home, produce babies and run their households.

But Da Vinci’s Disciples – women who showed remarkable talent and are being tutored by that great master – are not content to stifle their art. They want the world to see it and so they decide to bid on an upcoming installation for a chapel. They get the begrudging permission of Lorenzo de Medici, who does not believe they have the talent or the ability and they submit their concept.

It is chosen and soon the women are not just fighting a timeline but seemingly the bulk of the citizenry of Florence as they are appalled at lowly women doing such work. But not all are against them and they buckle down under the guidance of their master and some friends of his to get the job done.

There are also some personal subplot going on for the women and for Leonardo during the course of the production of the fresco so that the reader is kept engaged not only in the creation of the artwork but in the politics of the time and the everyday goings on of well to do Florentines.

I enjoyed this book as well as I did the first and while I believe it’s to be the completion of the series it does leave things open for further exploration so a reader can hope for continuation. The background details are such that I felt like I was back in Florence walking the streets and seeing the sights of that beautiful city. Of course it has changed mightily since the 15th century but some aspects are remarkably the same. The characters are unique and well drawn and in this volume there was even a pop up appearance by my favorite artist, Michelangelo. It is always encouraging to read a book when women triumph in a time when they were not considered to be more than well, art pieces or brood mares. Enjoy the book for what it is and celebrate the joy that art brings to the world.

Other books from Donna Russo Morin:

Portrait of a Conspiracy

Share62
Tweet
Pin1
Share
Email
Donna Russo MorinThe Competition
Urban Hymn, Directed by Michael Caton-Jones – Movie Review
How to be a Farm Cat – It’s no Mystery Around This Farm How we Save Money at PetSmart