I enjoy a good Biblical mystery. Discovery by Leslie Schweitzer Miller was sent to me at no charge for my honest review. 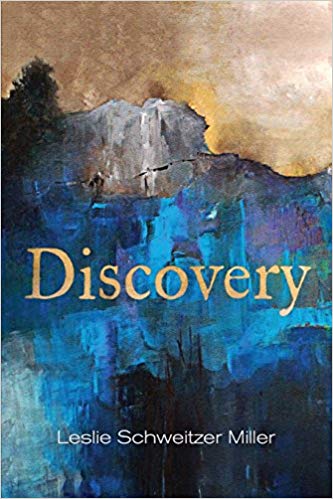 Abbé François Bérenger Saunière arrives in Rennes-le-Château in 1885 as impoverished as the remote mountain village itself. Inspired by the true story, this unconventional priest amasses a fortune, creates a magnificent estate and brings his ancient, crumbling Church of Saint Maria Magdalena to glory. During the renovation he unearths a first century urn containing two shocking documents–a parchment with grave consequences for his friend, Father Antoine Gélis, and a papyrus he feels morally bound to hide for safekeeping.

Dr. Giselle Gélis is resigned to living within the insular world of biblical scholarship until Dr. David Rettig, a gregarious American archeologist, bursts into her life in 2012. He’s more familiar with Shakespeare and poetry than the Gospels; she’s a pragmatist, he’s a dreamer–but it’s kismet, nonetheless. A trip across the south of France to learn more about her great-great-uncle’s life is transformed into a romantic sojourn, with nights spent in old castles and days devoted to atmospheric holy sites linked with Giselle’s heroine, Marie-Madeleine. The pièce de résistance of this idyllic week would have been exploring Rennes-le-Château and puzzling over the unsolved clues; instead, they stumble on the discovery of a lifetime.

As the threads of these stories intertwine, an intriguing and little known historical mystery is woven through a contemporary tale of sweeping emotional intensity, illuminating the complexities of human relationships–and the power of love.

I love stories. I love to hear them, read them and tell them. And I love words, not only in sentences connected to other words, but on their own, connected to mental images, or songs, or moments in time that open doors to the past. I am a psychiatrist and psychoanalyst, and therefore keenly aware of language and the opportunity it gives human beings to convey nuanced meaning. As a writer it allows me the privilege of taking the fruits of my imagination and sharing what I’ve dreamed up with people I may never know. It is a humbling and exhilerating experience.

I spent my childhood reading. The worlds created by great and lesser known writers saved me, inspired me, and introduced me to people and places and cultures and ideas that have remained with me ever since. I thought about being a writer, and wrote a little poetry, even a play, but then I became enamored of the theater. I dreamed of spending my life in the arts, but circumstances convinced me that going to medical school and helping people would be a more worthy and fulfilling life. “I want to do something that matters,” I told a friend who was a doctor. “Then create art,” he said, “make something for the spirit. It matters.” He was half right; both matter.

Much of what I’ve done in life hasn’t proceeded in the usual, expected way: I got married and had children before I attended The Mount Sinai School of Medicine in New York. My first residency was in pediatrics, then a second psychiatry, and ultimately psychoanalytic training. It has been and continues to be an enormously gratifying endeavor. Bearing witness to another human being’s life and watching them change is a rare privilege, and I love the relationships I have with the people in my care. Its also been quite a detour, but even a detour eventually leads you back to your original destination.

Throughout the years I’ve written professional papers, and a chapter in a medical book, but put my most of my creative energy into my psychoanalytic practice and painting. In fact, the book cover of Discovery is adapted from a painting I did, titled Rennes-le-Chateau,which was inspired by my visit there. Some of my paintings have words embedded in them, or a haiku written on the back, because, for me, words are the best expression of a person’s inner world, and ultimately I came back to the pleasure of story-telling. After writing several children’s stories, (unpublished) and a novel that lays dormant on a shelf, my husband and I started to write DISCOVERY together; it became clear we had different sorts of books in mind. I proceeded to write this story, a coming of age in middle age, a love story, and an exploration of how the past colors the present. The people I created, and their lives, have become as real to me as any friend or neighbor. I know everything there is to know about them, much that remains unwritten, but helps, I hope, to make them people you can care about, who are psychologically sound and believable. It has been my intention to make fiction and factual research, perception and invention swirl together and blur on the pages.

I hope you will find DISCOVERY fun, touching and thought provoking. It’s a celebration of independent thinkers, of the capacity to change, of kismet, of free will and the magical force we call love.

For photographs of some of the places visited in the book, a peek at some of my art, and additional information on the true story of Father Saunière, Father Gélis and Rennes-le-Chateau, please visit my website: LeslieSMillerAuthor.com

Discovery introduces the reader to a Biblical scholar – Giselle and an archeologist, David. She lives a rather insular life despite speaking several languages and traveling to conferences around the world. He works mainly in Israel excavating the world of the Bible but not following any of the religions it fomented. These two are the main protagonists in the tale but there is another important player – Abbe François Bérenger Saunière. He is the priest assigned to Rennes le Chateau as punishment but he sees it as freedom.

According to the book this area of France has a long history of reverence for Mary Magdalene as there are many who believe she came to the Languedoc after Jesus died and lived the rest of her life in France. There are also those who believe Jesus did not die on the cross but was spirited away and then he went on to live the rest of his life in India. Both of these beliefs go strongly against the teachings of the Catholic church and would be dramatic revelations if ever proven true. That makes them excellent fodder for fictional accounts.

Ms. Schweitzer Miller uses bits of the historical record and real people combined with fictional characters to tell her story of well, discovery in the south of France. To share with you what is found would be to share with you the plot and you know I don’t do that. You will have to read the book for yourself. It is an entertaining read – I finished it in an afternoon. I can’t say it breaks any new ground in Biblical mysteries but I found myself quite lost in both the historical half, the romance that blossomed and the overall mystery. It is sort of a cozy thriller as while people are killed there is nothing overtly gory or violent in the book, nor are the protagonists severely threatened. The pressures come from other places.

So, if you want bit of a history lesson of this area of France and its religious issues wrapped up into a mystery this will be the book for you.

One lucky US reader will win a copy of Discovery. Just enter as many ways as you would like on the Gleam widget below. Full rules are on the widget. Good luck everyone.