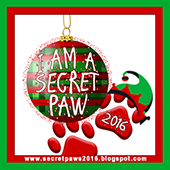 Every year the cat blogging world comes together to celebrate the holiday season with a very fun gift exchange called Secret Paws. The Farm cats look forward to it every year for they both like to give and to receive. This year they sent their package to a first time participant in the fun, Welcome to the Menagerie. The Farm cats were very excited to learn that the cats there really liked their presents.

The Farm cats got their package on Saturday from the clowder at Colehaus Cats, home of the famous painting cat Quint. If you didn’t know about Quint you can read his story and then if you need a really cool gift for someone you can purchase one of his artworks. Proceeds help cats in need. 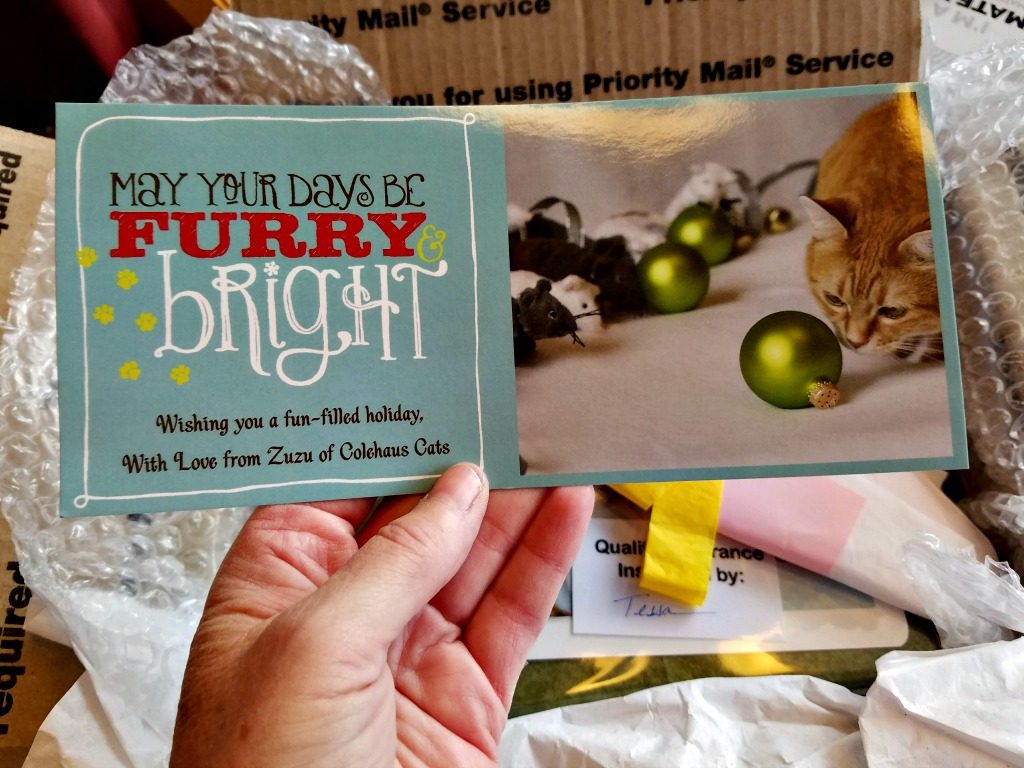 I was excited when the box arrived because truth be told I needed a smile. The hubby had been away for over a week and it’s always a bit lonely for me so getting a package full of fun was good. 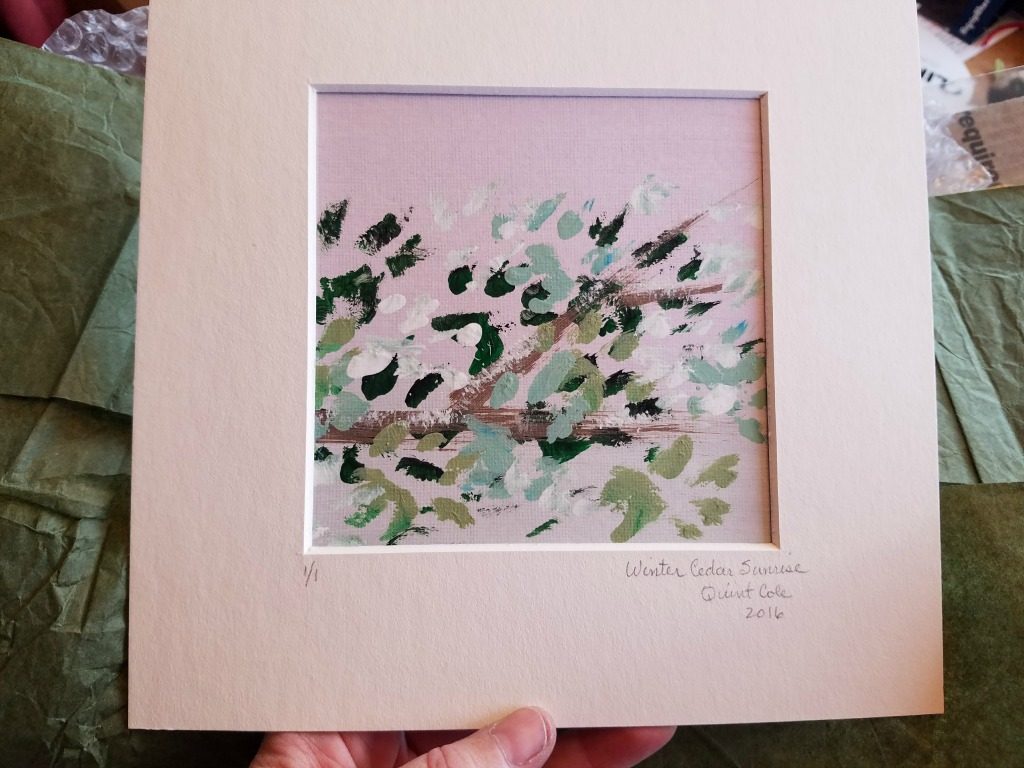 The first thing I opened was one of Quint’s beautiful paintings! It almost looks like the view out my window doesn’t it? Quint must have known how much I like trees – and they look like they have a touch of snow on them. 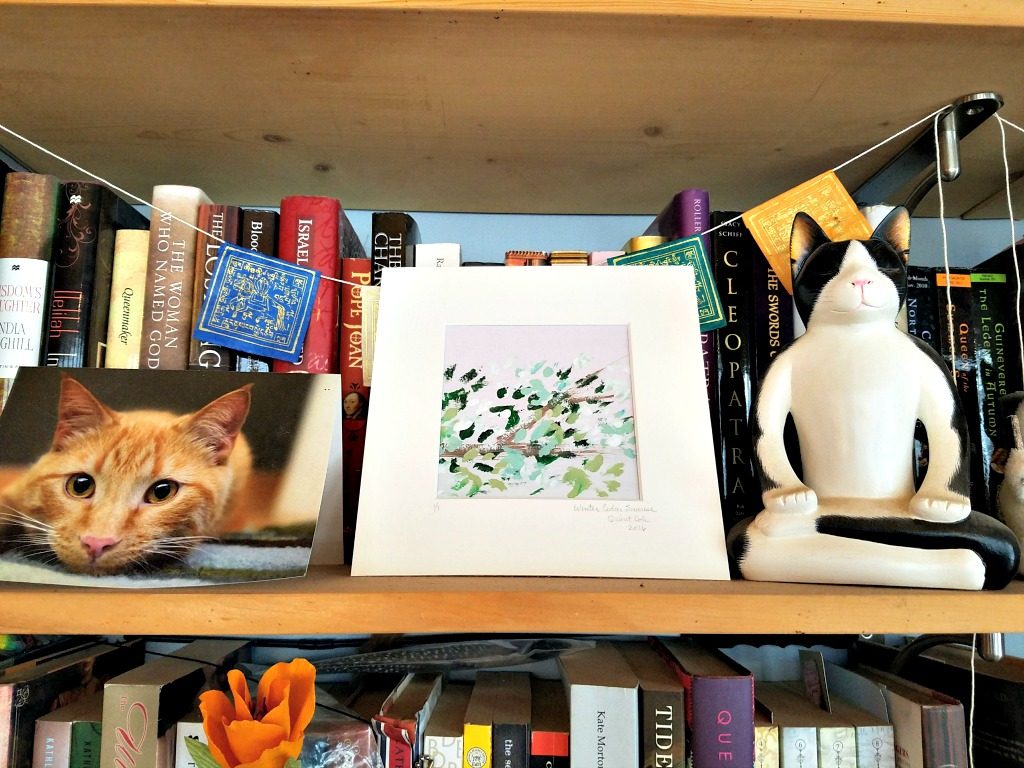 I’ve put it on a shelf with some of my favorites until I can get a frame for it. That way I can look up and see it any time I need a smile. Thank you Quint, I love it. 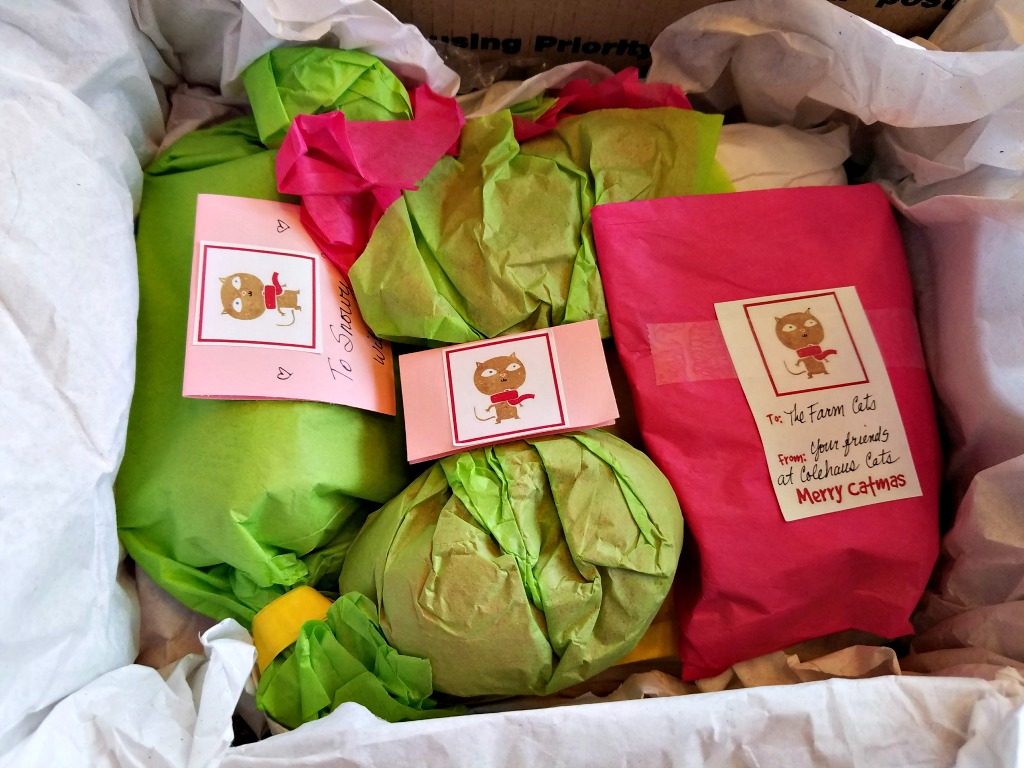 What Else Was in the Box?

There was SO MUCH MORE in the box! It was all wrapped so prettily too. (The Farm cats enjoyed the tissue paper – just sayin’) I was surprised I didn’t have more help unpacking the box. I think they were more interested in the white stuff falling from the sky. 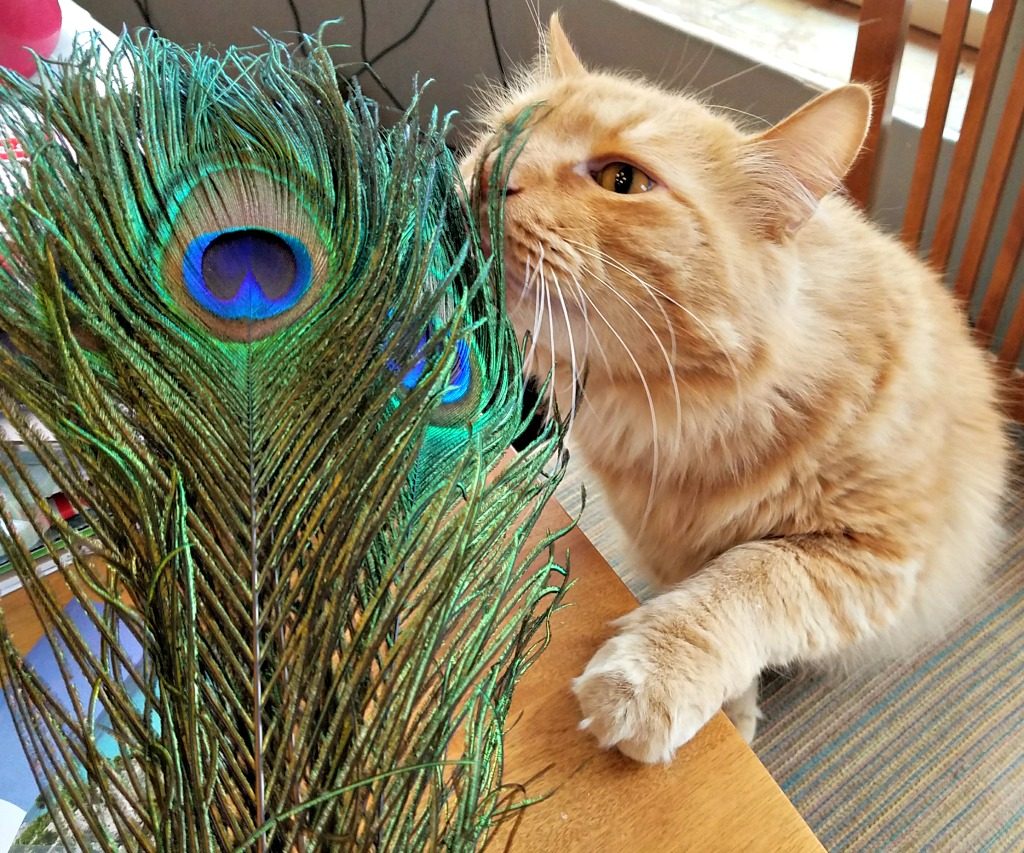 But Sherpa l.o.v.e.d. the peacock feathers. I’ve never had any of these to use in playing with the cats in spite of all of the stories I’ve read online. He wasn’t sure at first – he needed to give them a good sniff – but was soon whappin’ and biting and having a grand ole time with them. 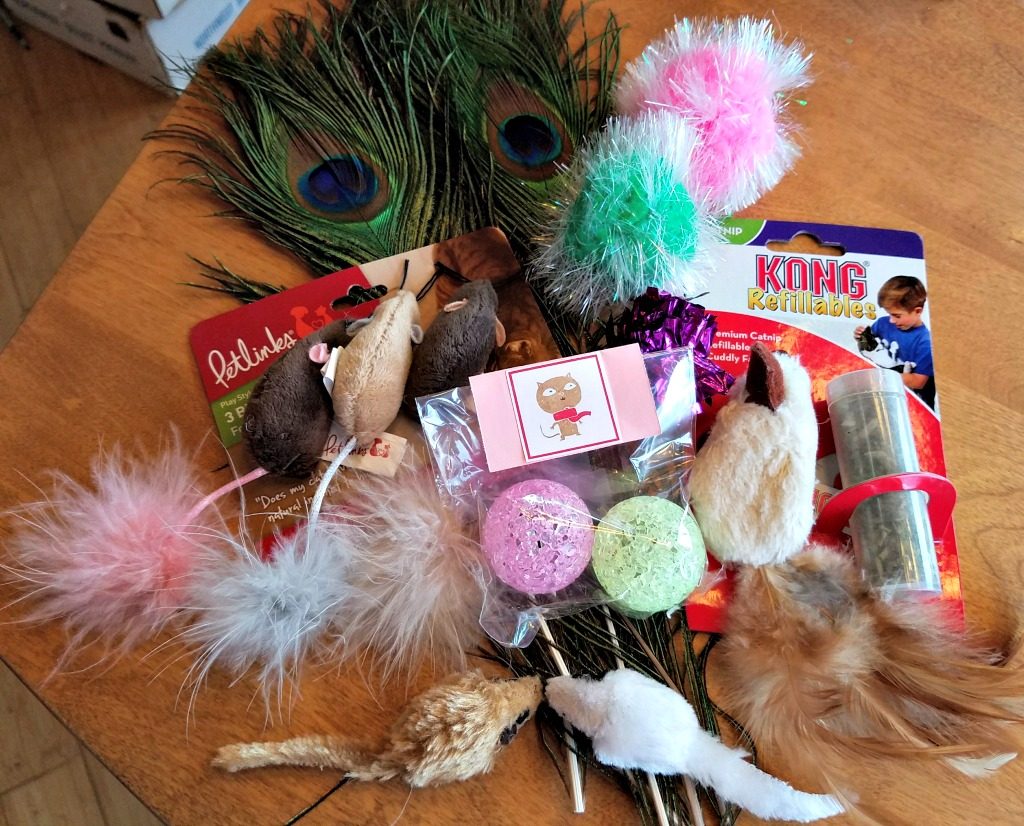 The packages held a bounty of Farm cat fun to be had. The Farm cats love the chase mousies and balls around the yurt if there are feathers attached all the more excitement awaits. I know that they will be enjoying these gifts for a while. 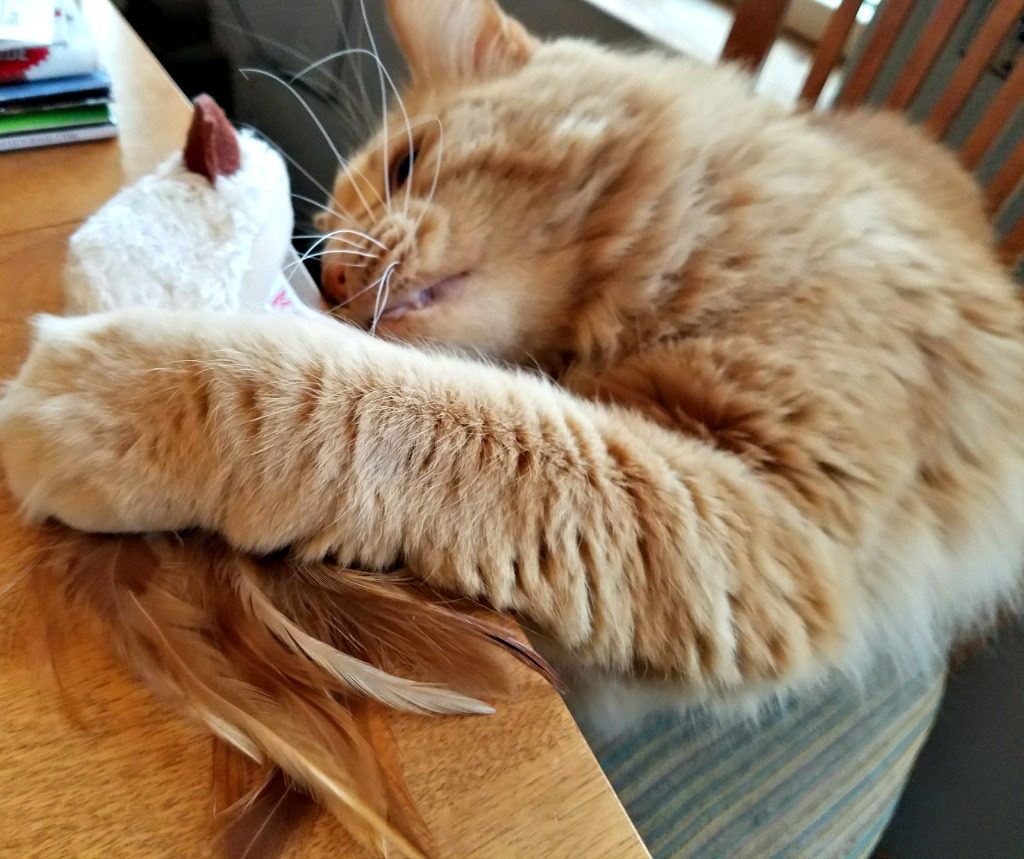 The stuff it yourself mousie was a big hit with Sherpa. He meowed that is was some really good ‘nip! I heard some noises a little later in the evening, I turned around and that mousie was flying through the air at my head level. So this is definitely a hit. 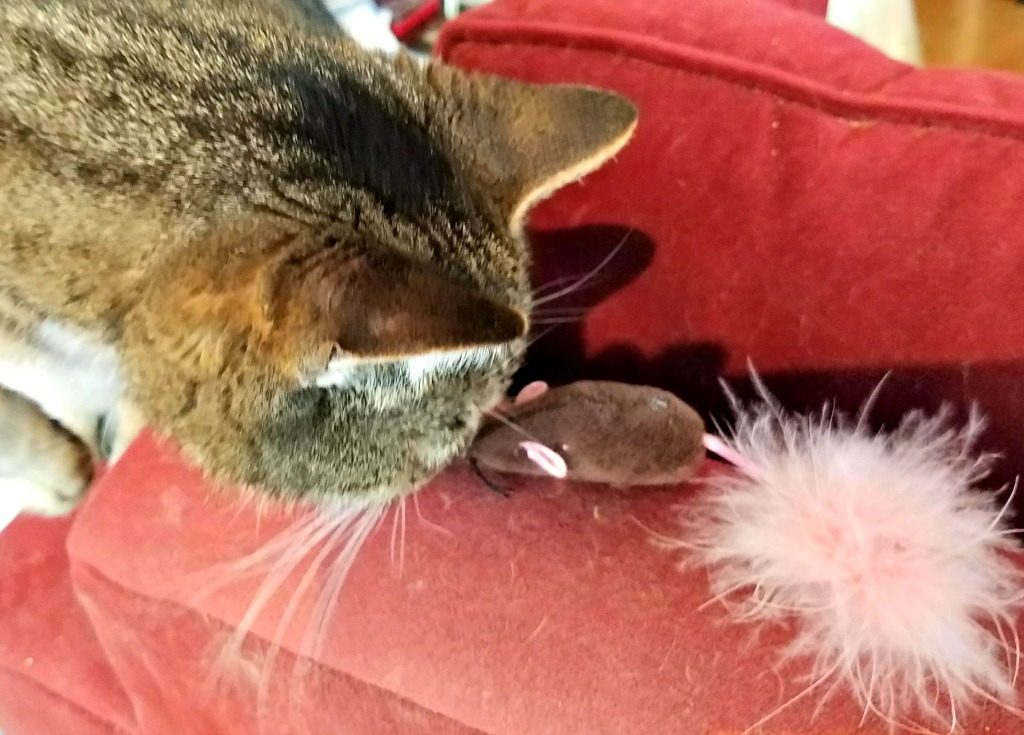 Stinky the Farm cat has taken one of the poofy tailed mousies for herself. I have not seen it since. I suspect it will show up the next time I sweep under the couch. Silly Stinky! 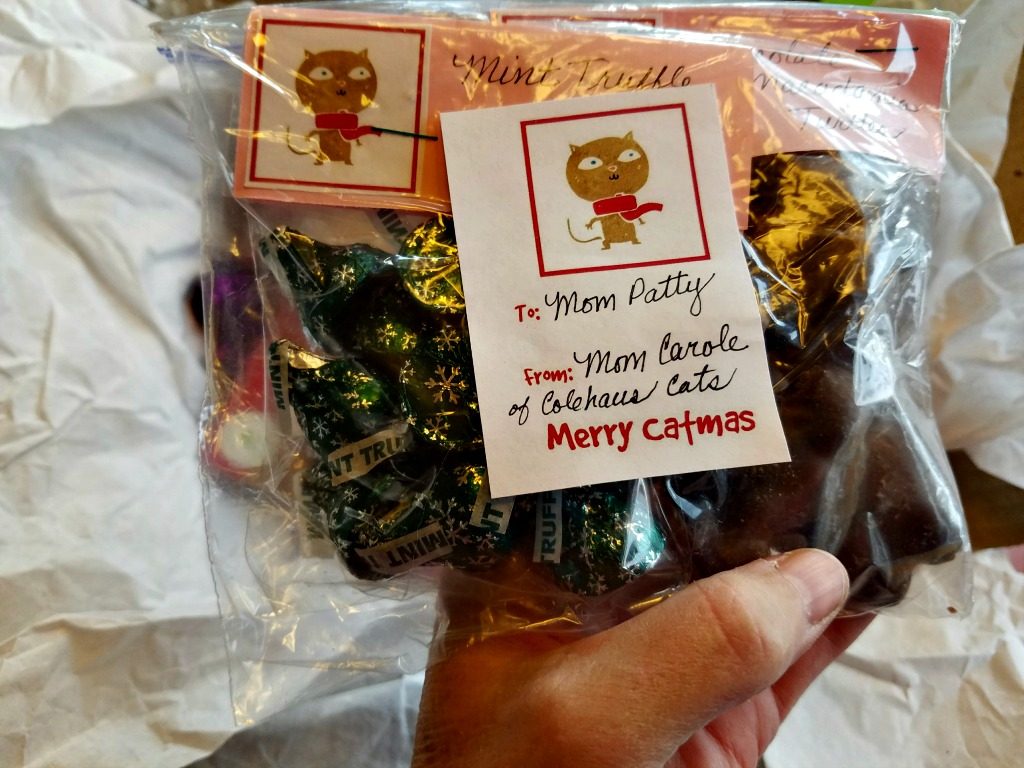 There were also some tasty treats for me in the box. Mmmmm, Macadamia nut turtles and minty Hershey Kisses. I will neither confirm nor deny the continued existence or non-existence of the turtles. BUUUUUURRRRP. (They were very good!) 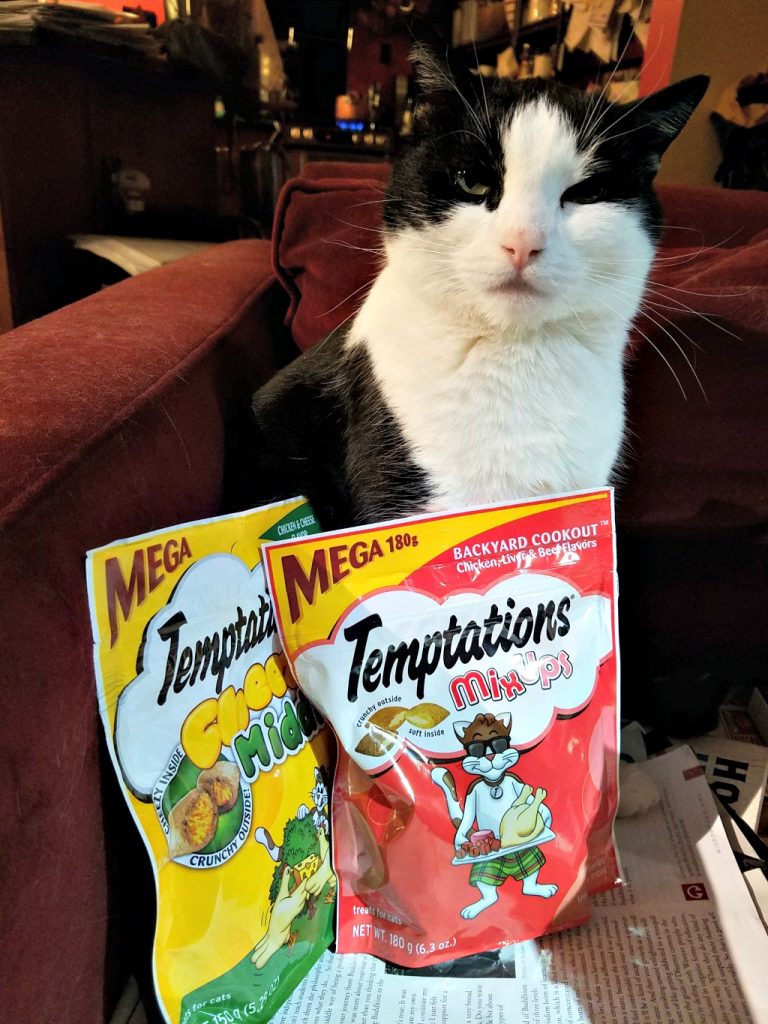 I was not the only one to receive tasty treats. A certain Tuxedo Farm cat was sent his heart’s desire. We all know by now of Harry’s  love of Temptations and the Colehaus Cats sent him a  huge supply! 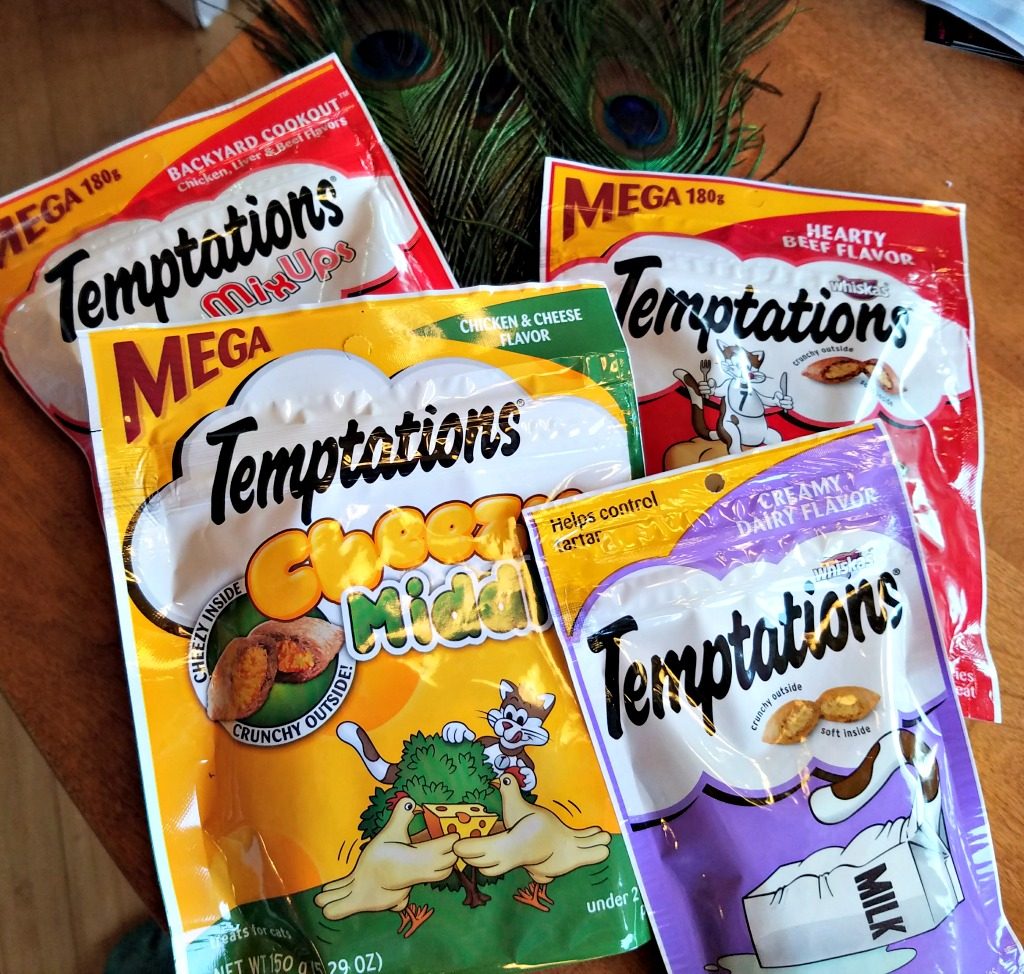 He is one happy Farm cat. There are even a couple of flavors he has not tried before. Needless to say Harry is in a state of bliss. 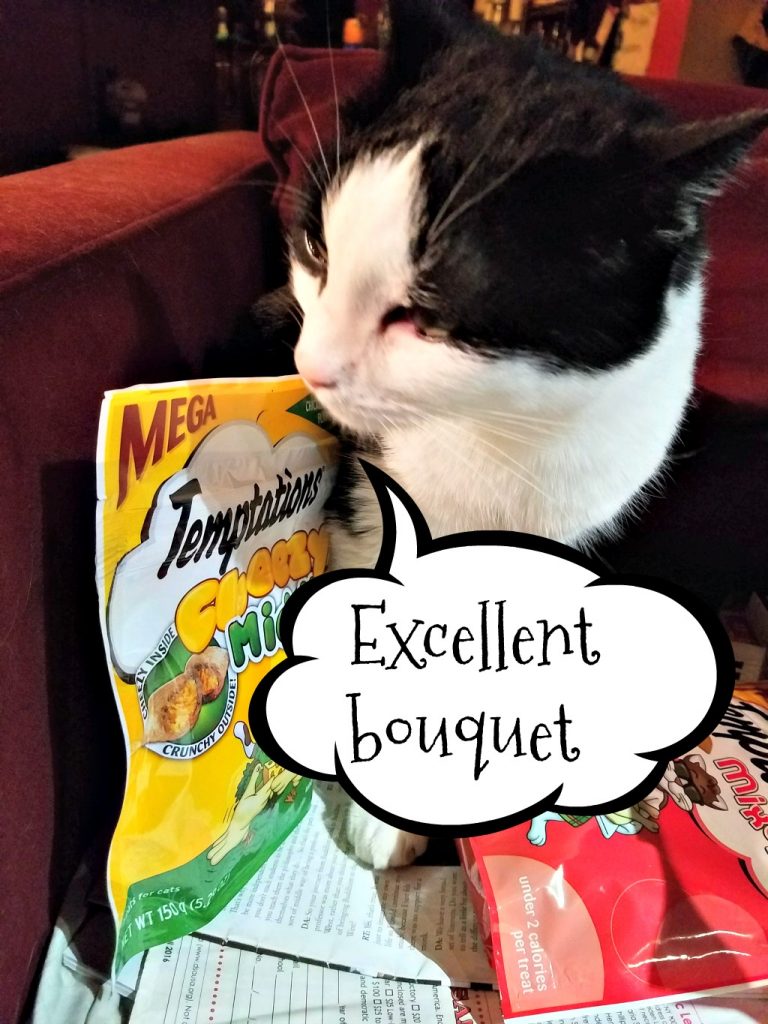 I am trying to convince him to share but it is not going well. He thinks all the Temptations in the world are his. I think he should apply for a quality control job.

The Farm cats – and I – thank mom Carole and all of the Colehaus Cats for this most wonderful Secret Paws box.

What the Farm Cats Sent

What the Farm Cats Received