Hanna Who Fell From the Sky by Christopher Meades – Blog Tour, Book Review and Giveaway

Every so often a book just strikes me for reasons I cannot explain and so it was with Hanna Who Fell From the Sky by Christopher Meades. I was sent a copy at no charge by TLC Book Tours 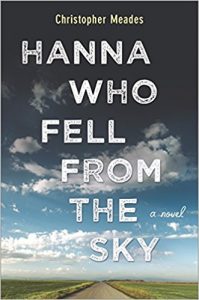 About Hanna Who Fell From the Sky:

Hanna has never been outside her secluded community of Clearhaven. She has never questioned why her father has four wives or why she has fourteen brothers and sisters. And in only one week, on her eighteenth birthday, Hanna will follow tradition and become the fifth wife of a man more than twice her age.

But just days before the wedding, Hanna meets Daniel, an enigmatic stranger who challenges her to question her fate and to follow her own will. Then her mother tells her a secret—one that could grant Hanna the freedom she’s known only in her dreams. As her world unravels around her, Hanna must decide whether she was really meant for something greater than the claustrophobic world of Clearhaven. But can she abandon her beloved younger sister and the only home she’s ever known? Or is there another option—one too fantastical to believe?

With lush, evocative prose, Christopher Meades takes readers on an emotional journey into a fascinating, unknown world—and, along the way, brilliantly illuminates complexities of faith, identity and how our origins shape who we are.

Christopher Meades is the author of three previous novels, including THE LAST HICCUP, which won the 2013 Canadian Authors Association Award for Fiction. In addition, Meades’s work has appeared in several literary journals including The Potomac Review and The Fiddlehead. He lives in British Columbia, Canada, with his family.

Hanna is a young woman who is the child of a polygamist family that lives on the edge of poverty in a small community. As she nears her 18th birthday she knows her future is set. The leader of the sect will decide who she will marry. But Hanna does not want to marry the man chosen – she is not sure she wants to marry just yet and certainly not to the man who has been decided upon.  Hanna has been the defacto mother to her younger sisters. Hanna has also recently learned some hard truths about life and herself and is trying to figure things out while dealing with her feelings for a young man who has just returned to the community.

There are elements of fantasy in the book and I have to admit that I didn’t understand what they brought to the story. Maybe I’m just too literal a reader. I enjoyed the story – don’t get me wrong. I just didn’t see what these bits of fluff added to the tale. To me it would have been the same story without them and I am baffled as to what they added other than whimsy. Perhaps I am missing something and I would love for someone to enlighten me if I am.

Putting them aside, the story was a good one with lots of drama to keep a reader turning the pages. Some characters didn’t seem to be fully realized but like the mystical aspects I just kind of ignored them. For me at least if I just stuck to the main story and characters I was happy with the read.

One lucky US reader will win a copy of Hanna Who Fell From the Sky. Just enter as many ways as you would like on the Gleam widget below. Full rules are on the widget. Good luck everyone.