Lie to Me by J.T. Ellison – Blog Tour and Excerpt with Giveaway

I am very pleased to welcome author J.T. Ellison today with an excerpt of her new book, Lie To Me. Ms. Ellison is on a tour with TLC Book Tours and this is excerpt #4. Be sure to check the Tour Schedule so you can read all of the exciting snippets from the book and read the reviews. I also have a giveaway for a copy of the book at the end of the post so be sure to enter! 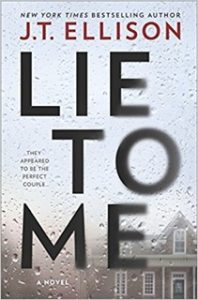 There Are Cracks in Every Marriage

Ethan shut the door on Siobhan, proud of himself for not slamming it. He went into his office and poured a lowball half-full of Scotch. He had a nice mirrored bar cart set up in the corner; it felt very Fitzgerald to him, and he’d always taken pride in it.

Now it looked like failure. He’d been drinking too much this year. Understandable, of course, but he’d been using it as a barrier against Sutton.

He sat down at his desk, where the picture of the three of them sat discreetly on the corner, between the drooping spider plant and the phone. He’d never had the heart to put it away. He liked the photo. They were all happy. Smiling. They’d been at the beach, noses sunburned, the baby wearing a silly sunhat, a breeze blowing Sutton’s gorgeous red hair around. Toothy smiles and hugs and goodwill. Their lives, captured, a moment in time that could never be recreated.

He reached out and touched the silver gilt frame, then drew his fingers back as if burned.

He’d thought having a baby would fix things.

It was a stupid thought. Barmy. He should have been committed for thinking a baby would make things perfect again. But at the time, he hadn’t thought it through. He’d been driven by his own emotions.

Yes, that was it. His emotions had led him astray. Men weren’t supposed to have such deep feelings. It was the artist in him. He wanted things from this life—a career writing, a wife to love him, a home to call his own. Heirs were simply part of things, a fact unstated and understood.

Still, the baby. He didn’t think the concept was terribly complex. Sutton was a woman. All women wanted babies. Right? She said she didn’t, that her life was perfect the way it was, and really, how would they write with a tyke underfoot, but more than once, he’d caught her looking after women with prams with such bald yearning on her face that it made him sad. And she’d told Ivy that she loved kids, he’d heard them in the kitchen one day, gossiping over the teapot.

But every time he broached the subject, Sutton always told him no.

Maybe it was selfish of him, maybe it was wrong. But he’d wanted a baby. He’d wanted to change things between them. He’d wanted Sutton to look at him with wonder in her eyes again. Because he knew, without a shadow of a doubt, that Sutton used to love him.

He just wasn’t sure when she’d stopped.

He shook himself like a wet dog, the old images of their once-happy life shedding onto the floor. He didn’t know what to do, so he got up and paced through the house. Went from room to room, replaying memories, seeing shadows of his wife in all the right places—the couch, her feet tucked up under her legs like a cat; her office, head bent over the keyboard in that odd way that made her chin look pointed like an elf’s; the bedroom, where she lay willing and open, ready for him to come into her and make her scream.

Their life had always been amazing. Sutton used to make him feel sexy, witty, smart. Every word he wrote was meant to impress her, everything he did was a subtle bit of bragging. Look at me, wife. Look at all that I am for you.

He tried harder for her than anyone he’d ever been with. Gaining a smile, a laugh, made him happy to his core.

He didn’t know when things went south. Didn’t know when she’d stopped loving him, when she gave up on their marriage. It was well before Dashiell, that he knew. After he stupidly stuck his prick in another woman, maybe, or even before, when they’d renovated the behemoth. Weren’t renovations a major driver in divorce cases, like Facebook and affairs? He thought he’d read that somewhere.

Or was it when the words he wrote for her dried up, and he stopped working entirely? Before he got desperate. Before he made the greatest mistake of his life.

No, he thought it was maybe before that when his warm and sexy wife had grown cold. Frigid. Unwilling. Distant.

The laughs had become few and far between. She’d looked at him with a mix of derision and bemusement, as if she’d woken up one morning married, and to a stranger, to boot.

He’d asked her, one very drunken night, why she’d stopped loving him. She’d laughed, harshly. “I love you more now that the day we met. That’s the problem.” And she wouldn’t say anything more.

And here they were. Five years later, parents of a dead baby, their dead marriage strewn on the rocks, mistakes piled liked a stack of ancient newspapers against the door.

He was responsible for Dashiell’s death. For Sutton’s madness. For the missed deadline, the stalking, the cancelled book contract. Ethan knew this, knew it to his bones.

He’d made so many mistakes, there was no recovering from them all.

There was just one problem.

He loved Sutton to his core. He’d never loved a woman as much as he loved her. He would do anything for her. Anything.

He had to decide whether Sutton was simply hiding from him for a few days, or if she’d left for good. Problem was, if she didn’t show up by this evening, he was going to have to bring the police in to search for her, because everyone would be suspicious of him if he didn’t, and the subsequent investigation was going to rip apart their very carefully cultivated lives, and who knew what sort of roaches would scurry out of the woodwork?

If she was hiding out for a few days, all well and good. If she’d actually run, he would have to go after her. For her to disappear permanently and thoroughly would have taken planning.

Either way, Sutton was a very cunning woman. He simply had to think like her, and he’d find the path to her again.

And then it hit him.

About Lie to Me:

Domestic noir at its best. Readers will devour this stunning page-turner about the disintegration of a marriage as grief, jealousy, betrayal and murder destroy the facade of the perfect literary couple. New York Times bestselling author J.T. Ellison takes her exceptional writing to a new level with this breakout novel.

They built a life on lies

Sutton and Ethan Montclair’s idyllic life is not as it appears. They seem made for each other, but the truth is ugly. Consumed by professional and personal betrayals and financial woes, the two both love and hate each other. As tensions mount, Sutton disappears, leaving behind a note saying not to look for her.

Ethan finds himself the target of vicious gossip as friends, family and the media speculate on what really happened to Sutton Montclair. As the police investigate, the lies the couple have been spinning for years quickly unravel. Is Ethan a killer? Is he being set up? Did Sutton hate him enough to kill the child she never wanted and then herself? The path to the answers is full of twists that will leave the reader breathless.

One lucky US reader will win a copy of Lie To Me. Just enter as many ways as you would like on the Gleam widget below. Full rules are on the widget. Good luck everyone.

Share3
Tweet
Pin
Share
Email
J.T. EllisonLie to Me
Sauerkraut – What to do with All of that Cabbage
The Talented Ribkins by Ladee Hubbard – Blog Tour and Book Review with a Giveaway