The Lord of Ireland by E.M. Powell – Book Review

I received a free copy of The Lord of Ireland from Historical Fiction Virtual Book Tours for my honest review. It’s the third book in the Fifth Knight trilogy. 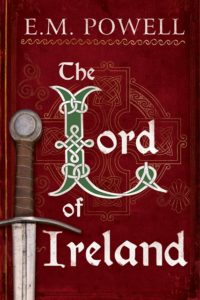 England, 1185. John is a prince without prospect of a crown. As the youngest son of Henry II, he has long borne the hated nickname ‘Lackland’. When warring tribes and an ambitious Anglo-Norman lord threaten Henry’s reign in Ireland, John believes his time has finally come. Henry is dispatching him there with a mighty force to impose order.

Yet it is a thwarted young man who arrives on the troubled isle. John has not been granted its kingship—he is merely the Lord of Ireland, destined never to escape his father’s shadow. Unknown to John, Henry has also sent his right-hand man, Sir Benedict Palmer, to root out the traitors he fears are working to steal the land from him.

But Palmer is horrified when John disregards Henry’s orders and embarks on a campaign of bloodshed that could destroy the kingdom. Now Palmer has to battle the increasingly powerful Lord of Ireland. Power, in John’s hands, is a murderous force—and he is only just beginning to wield it.

Born into the family of Michael Collins (the legendary revolutionary and founder of the Irish Free State) and raised in the Republic of Ireland, she lives in north-west England with her husband, daughter and a Facebook-friendly dog.

She reviews fiction and non-fiction for the Historical Novel Society, blogs for English Historical Fiction Authors and is a contributing editor to International Thriller Writers’ The Big Thrill magazine.

This is the third book in The First Knight series and I am honored to have reviewed them all. This installment takes the reader to Ireland with Henry II’s son John, known to history as John Lackland and ultimately as King John after his brother, Richard the Lionheart died. He was the youngest son of Henry and Eleanor of Aquitaine and he didn’t have the power or lands that his brothers did and he felt that lack greatly. When given the task of going to Ireland by his father he felt it was his chance to take control and take a crown.

Henry does not completely trust the people in Ireland and perhaps he doesn’t trust his son so he sends a man he does trust to oversee the endeavor and to try and learn if Henry’s main Irish ally is friend or foe. John’s reception in Ireland is initially warm but his behavior soon leads to war and Henry’s man, Sir Benedict Palmer is soon caught up in trying to save John from himself and someone he loves.

This book stands alone just fine. It had been a while since I had read the previous two books in the series and truth be told I had forgotten much but this book deftly reminded me of what I needed to know to understand the players and the back stories. The characters are richly developed and very interesting. There is an author’s note so you do learn what is real and what is fictional. Ms. Powell is quite skilled at weaving history with her imaginary world. And it is a rich world she creates. The medieval times come alive through her descriptive writing. The characters in this book are not all likable and at times you are left guessing but they are all very intriguing.

You can read my reviews of other books by E.M. Powell including The Fifth Knight, The Blood of the Fifth Knight and The King’s Justice.