I received a free copy of Lost Love’s Return by Alfred Nichols from the publisher at no charge for my honest review. 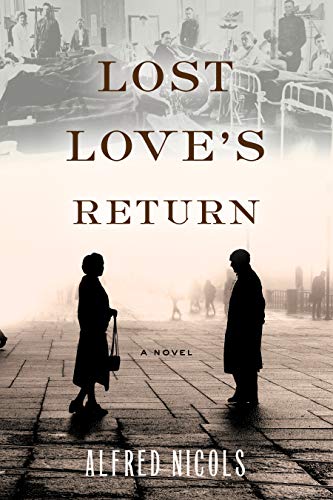 In 1918, in a dramatic battlefield scene on the Western Front, young American soldier Peter Montgomery sustains a severe wound. He’s transported to a British hospital, where he falls hard for Elizabeth, a young English nurse, and she for him. Upon his release, they engage in an intense love affair, forever changing both of their lives.

Separated and shipped home, Peter tries desperately to reconnect with Elizabeth, but the War and the Spanish flu epidemic have the world in turmoil. Despite his every effort, desperate and in great distress, he is unable to reconnect with her. And then, suddenly, all hope is gone.

For the next twenty-seven years, Peter stoically meets many challenges in his life: finding a way to make a living during the Depression; being a devoted father to his son, born eleven months after marriage to a woman he does not love.

This debut novel from Alfred Nicols takes you from the battlefields of Europe during WWI to postwar Mississippi and into WWII and begs one question. Will true love prevail?

ALFRED NICOLS received undergraduate and law degrees from the University of Mississippi. Following military service, he had a career as a lawyer, a state trial judge, and a federal judge. He and his wife, Mary, live on rural acreage in Mississippi. “Lost Love’s Return” was written as an effort to leave his children and grandchildren, perhaps others, insight into issues in life and the value of family ties, even to imperfect people.

WWI brings a young American named Peter to the battlefield where he is injured and finds himself being treated by the lovely young nurse named Elizabeth. They fall in love. After the War they try to find each other again but timing is not on their side. And so they go on. What follows is a very engrossing and eminently readable tale.

The topics in the book are of course not easy ones to read about – we have war, injury, the Depression – I keep swearing off books about the World Wars and yet I keep reading books about them. Peter comes home from the War, gets married and lives his life despite not really being in love with his wife.

What does his future hold? Will he be happy? That is what makes reading this book a must. It kept me very entertained for a long car ride and for that I was very grateful. It was very engrossing and had a well developed plot with engaging characters.