There was something about the synopsis of Rainbirds by Clarissa Goenawan that just called to me to read it. I cannot tell you why as it is not a happy story. The offer for a free copy in exchange for my honest review from TLC Book Tours must have come at a time when I wanted a thought provoking book. It delivered. 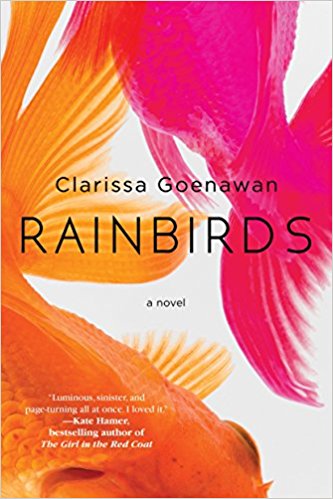 Set in an imagined town outside Tokyo, Clarissa Goenawan’s dark, spellbinding literary debut follows a young man’s path to self-discovery in the wake of his sister’s murder.

Ren Ishida has nearly completed his graduate degree at Keio University when he receives news of his sister’s violent death. Keiko was stabbed one rainy night on her way home, and there are no leads. Ren heads to Akakawa to conclude his sister’s affairs, failing to understand why she chose to abandon the family and Tokyo for this desolate place years ago.

But then Ren is offered Keiko’s newly vacant teaching position at a prestigious local cram school and her bizarre former arrangement of free lodging at a wealthy politician’s mansion in exchange for reading to the man’s ailing wife. He accepts both, abandoning Tokyo and his crumbling relationship there in order to better understand his sister’s life and what took place the night of her death.

As Ren comes to know the eccentric local figures, from the enigmatic politician who’s boarding him to his fellow teachers and a rebellious, captivating young female student, he delves into his shared childhood with Keiko and what followed. Haunted in his dreams by a young girl who is desperately trying to tell him something, Ren realizes that Keiko Ishida kept many secrets, even from him.

Clarissa Goenawan is an Indonesian-born Singaporean writer. Her award-winning short fiction has appeared in literary magazines and anthologies in Singapore, Australia, the UK, and the US. Rainbirds is her first novel.

Rainbirds is quite different in style and tone than most of the books I have read. I cannot recall reading any contemporary fiction by a Japanese author – that doesn’t mean that I haven’t, it just means I cannot remember. I do read quite a few books in a year. I’ve read historical fiction books by Japanese authors/that take place in Japan but the issues and the times were much different.

Ren is a young man just finishing up his graduate education when he receives a phone call that none of us would ever want to receive: his sister is dead and her death was due to murder.  His world, to say the least implodes. His sister cared for him as a child since his parents were always fighting. One day she left the house suddenly and moved to a small town. They kept in regular touch by phone.

He decides after talking to the police in the town to remain. In fact, he not only remains he almost inhabits her life. He takes what was her job, he moves into what was her room. As he seeks answers he only finds more questions and he learns that he really didn’t know his sister at all.

From the opening page there was a feeling of  heaviness that hangs over the tale. As Ren tries to find out why someone would so brutally murder a sister he thought he knew well but as he tried to help the police he realizes that his knowledge of her life was superficial at best. He didn’t know why she moved to the small town from Tokyo. He didn’t know if she had a boyfriend. He talked to her once a week on the phone and that was it.

He settles into his new/her old life and he tries to learn what he can. As the story unfolds it flashes back to their life before she left home or to incidences from Ren’s life to help illuminate different bits of the tale. Ren is not always a likable guy – in fact, he really does not treat the women in his life very well at all. This includes his sister and the woman he is currently dating as well as some others from his past. He seems to see them as being there to be of service to him rather than any relationships to be reciprocal. He has a lot to learn in how he manages his relationships.

As Ren searches for answers about his sister’s death he learns some things he doesn’t like but he comes to terms with a side of her he did not know nor understand. It ends up teaching him about himself.

This is the kind of book that pulls you along and then something happens that makes you think. Sometimes it’s good, sometimes it’s bad. There are a number of negative behaviours going on in this tale – some belong to Ren as I mentioned above. others belong to ancillary characters. Some make sense within the story others I still wonder why they were included.

All that being written I found the book quite compelling and thought provoking. It stayed with me for several days afterward. The presence of such flawed characters certainly makes for interesting reading and the ending leaves a certain hope for the future. Not all is resolved and that uncertainty does also leave the reader a bit off balance. It’s a book for this current time I believe.