I obviously love historical fiction but give me some art historical fiction and I may never stop reading. My AA is European History then I went on to finish in Art History with a concentration in the Renaissance – especially Michelangelo. Raphael, Painter in Rome by Stephanie Storey features Michelangelo as a secondary character – not that he would ever consider himself such – and tells the tale of another great artist of that glorious time in art, Raphael. A man who pursued perfection in his paintings. 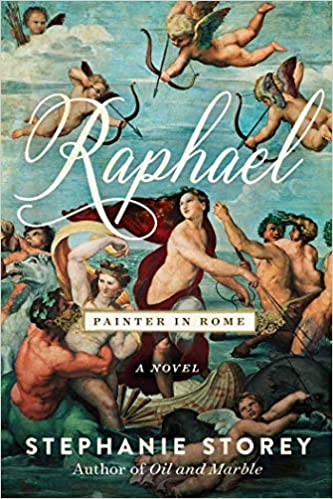 About Raphael, Painter in Rome:

Another Fabulous Art History Thriller by the Bestselling Author of Oil and Marble, Featuring the Master of Renaissance Perfection: Raphael!

Michelangelo’s Sistine Chapel ceiling is one of the most iconic masterpieces of the Renaissance. Here, in Raphael, Painter in Rome, Storey tells of its creation as never before: through the eyes of Michelangelo’s fiercest rival—the young, beautiful, brilliant painter of perfection, Raphael. Orphaned at age eleven, Raphael is determined to keep the deathbed promise he made to his father: become the greatest artist in history. But to be the best, he must beat the best, the legendary sculptor of the David, Michelangelo Buonarroti. When Pope Julius II calls both artists down to Rome, they are pitted against each other: Michelangelo painting the Sistine Ceiling, while Raphael decorates the pope’s private apartments. As Raphael strives toward perfection in paint, he battles internal demons: his desperate ambition, crippling fear of imperfection, and unshakable loneliness. Along the way, he conspires with cardinals, scrambles through the ruins of ancient Rome, and falls in love with a baker’s-daughter-turned-prostitute who becomes his muse.

With its gorgeous writing, rich settings, endearing characters, and riveting plot, Raphael, Painter in Rome brings to vivid life these two Renaissance masters going head to head in the deadly halls of the Vatican.

Stephanie Storey is the author of Oil and Marble: a Novel of Leonardo and Michelangelo, which The New York Times called ‘tremendously entertaining,’ has been translated into six languages, and is now in development as a feature film by Pioneer Pictures. She is also the author of the upcoming novel, Raphael, Painter in Rome. She is also a television producer of shows like The Alec Baldwin Show on ABC, The Arsenio Hall Show on CBS, and Emmy-nominated The Writers’ Room for the Sundance Channel. When not writing fiction or producing television, she can usually be found traveling the world with her husband—an actor and Emmy-winning comedy writer—in search of her next story. Visit her at StephanieStorey.com

The politics of the particular time in Rome’s history are as much a “character” in this book as the outsized personalities of the great artists of the Renaissance; Michelangelo, Raphael, Leonardo, Bramante and others. I will admit to not being a huge fan of Raphael’s art – his pieces are too refined, yes – too perfect for me. My passions lie in more towards the chaos and power of what Michelangelo left to the world. That is not discount the beauty of what Raphael created – this is the magnificence of art. There is something for everyone.

The focus of this book is the painting of the Sistine Ceiling. Obviously we all know who painted it and how it looks now but Ms. Storey actually creates a tension about whether the outcome will be as history has shown. That is some kind of writing. I mean – we all know that Michelangelo painted that ceiling, we know exactly what it looks like and yet as I got caught up in the story I wondered if he was going to be fired. Although history also tells us that Michelangelo was a testy sort of fellow and despite his genius he might well of had been!

But this is Raphael’s story and so we should turn our attention to his efforts to promote himself to the powers that be so that he could be considered for the job of painting the ceiling. We learn of Raphael growing up in his father’s shadow, learning to paint from him. It was his father that gave him the drive to seek perfection in his art. After his father died he was apprenticed with the great painter Perugino and from there he went on to seek to improve upon many of the masters’ works of art. Was he copying or was he improving? A good question…

Ms. Storey shows the artist’s insecurities in his desire to best all of the artists of his day but one wonders if Raphael was ever passionate about the art or only about acheiving the perfect painting. He is also determined to paint the Sistine, not realizing that it has already been promised to Michelangelo. Not realizing that Michelangelo was not just a sculptor. Raphael did paint a suite of rooms in the Vatican and that is where you will find his most well known work, the one we know today as The School of Athens. But is was not the ceiling.

The story was a truly compelling one, especially for someone who loves this period in history and these artists. But beyond the art it’s just a good tale. It was a real page turner for me and I knew exactly how it was going to turn out! Ms. Storey brought the greats of the Renaissance to life from Pope Julius II, Pope Leo X (he of the “…God has seen fit to grant us the Papacy, let us enjoy it.”) to the great artists of the time. I did not have the opportunity to read her first book, Oil and Marble but it’s on my wishlist.

And as an aside, I remember the first time I saw the Sistine Ceiling. I walked into the room and was literally was stopped dead in my tracks. The guard at the door had to touch my arm and encourage me to move along. I’ve never had an experience like that before or after. It was close when I saw Michelangelo’s Pieta in St. Peter’s. Even as stunning a work of art as that is, it did not cause the reaction the Ceiling did.