Sacrifice: Book One of y Ddraig (The Dragons of Brython) by Gwendolyn Beynon – Blog Tour and Book Review 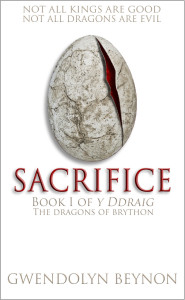 Melangell is a ‘Lifebringer’, a dragon-maiden learning to protect one of the land’s most ancient mysteries, y Ddraig. She expects to pass her years as have a score of teachers before her—sequestered, safeguarding an egg that barely moves from year to year, never using the deadly and secret skills she has been taught. But the King’s relentless pursuit of this most holy relic throws her into the middle of war and though she is not yet adept Melangell must enter captivity with the egg to defend the sleeping dragonling within.

Her abductor is Cai ap Cynyr—fierce warrior, loyal brother and sword-arm to the high Chieftain, Artwr. He has been scouring the land for the relics Artwr demands to ensure triumph against the Angles invading from the east. Cai uses the Lifebringer’s mystique to master his armsmen, but when he spirits Melangell and the dragon egg further into seclusion, she grows intrigued by her captor. But she is a Lifebringer—sworn only to y Ddraig—and Cai must deliver the dragonling to Artwr to at last drag himself out of his legendary brother’s deep shadow.

And all the while, the egg readies itself to emerge…

Australian author, Gwendolyn Beynon, comes from a long line of storytellers of Welsh and Cornish stock. She grew up reading romance and fantasy novels but the y Ddraig series is her first foray into historical fantasy.

The idea for the y Ddraig series came while on a pilgrimage to Wales (the land of her fathers) where she was visiting holy wells and ancient yew trees. She grew captivated with the way that the ancient stories of Welsh literature, myth and history still co-existed comfortably in contemporary Cymru, and by the atmosphere of mystery that still exists around much of Wales’ natural spaces.

An Arts graduate from Curtin University (with double-majors in Film and Theatre), Gwen has worked in communications all her life. She sold her first book in 2008 and has been writing for a living with her hounds at her feet and Celtic music as a backdrop ever since.

You can read an excerpt of Sacrifice

Sacrifice is the first of a trilogy that looks at Welsh legends and the King Arthur myth in a different way. It combines fantasy and romance into a really interesting story about a young woman taken from her family to train to be a Lifebringer – the caretaker of a dragon egg basically.

The author uses the Welsh names for character and places but I’m not going to do that here because I’d have to keep referring back to the book to spell them. Just know going into the book that definitions and pronunciations are provided but if you are anything like me you just learn to recognize the block of letters and you make some kind of noise in your head to accommodate the word. Like “y Ddraig” – I read the pronunciation but that was that and the rest of the book it was “deedeerayg.” Whatever works to keep things flowing, right? I have enough problems keeping characters straight with my memory issues to worry about correct pronunciations in my head.

Our heroine, Mellengel must protect the Creil (the dragon’s egg) at all costs and she is willing to give her life to do so. Arthur is willing to wipe out an entire race to acquire the egg so he can continue his remarkable reign. What neither one of them counted on what Arthur’s brother Cai. A man of legend and principle. Arthur has sent him to capture the Creil and bring it back with a Lifebringer. What Cai didn’t count on was finding a woman who challenged him and intrigued him. Instead of capturing her, Mellengel capture his heart and the course of his life is changed forever.

I don’t tend to go for books in the fantasy genre but I do like the whole King Arthur story. Not that Arthur plays any real role in this book but he is in every corner. I’m glad I did read it because it was nice to leave reality and enter the realm of the ancients. The main characters were all exciting and well developed. Some of the minor ones were just there to serve their purpose and that’s fine. I really did enjoy the story and am looking forward to the next books in the series so I can find out how it all plays out.

You can purchase Sacrifice on Amazon.com (affiliate link)