I received a free copy of Secrets of Nanreath Hall from TLC Book Tours for my honest review. 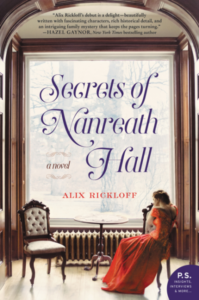 This incredible debut historical novel—in the tradition of Beatriz Williams and Jennifer Robson—tells the fascinating story of a young mother who flees her home on the rocky cliffs of Cornwall and the daughter who finds her way back, seeking answers.

Cornwall, 1940. Back in England after the harrowing evacuation at Dunkirk, WWII Red Cross nurse Anna Trenowyth is shocked to learn her adoptive parents Graham and Prue Handley have been killed in an air raid. She desperately needs their advice as she’s been assigned to the military hospital that has set up camp inside her biological mother’s childhood home—Nanreath Hall. Anna was just six-years-old when her mother, Lady Katherine Trenowyth, died. All she has left are vague memories that tease her with clues she can’t unravel. Anna’s assignment to Nanreath Hall could be the chance for her to finally become acquainted with the family she’s never known—and to unbury the truth and secrets surrounding her past.

Cornwall, 1913. In the luxury of pre-WWI England, Lady Katherine Trenowyth is expected to do nothing more than make a smart marriage and have a respectable life. When Simon Halliday, a bohemian painter, enters her world, Katherine begins to question the future that was so carefully laid out for her. Her choices begin to lead her away from the stability of her home and family toward a wild existence of life, art, and love. But as everything begins to fall apart, Katherine finds herself destitute and alone.

As Anna is drawn into her newfound family’s lives and their tangled loyalties, she discovers herself at the center of old heartbreaks and unbearable tragedies, leaving her to decide if the secrets of the past are too dangerous to unearth…and if the family she’s discovered is one she can keep.

Alix Rickloff is a critically acclaimed author of historical and paranormal romance. Her previous novels include the Bligh Family series (Kensington, 2009), the Heirs of Kilronan trilogy (Pocket, 2011), and, as Alexa Egan, the Imnada Brotherhood series (Pocket, 2014). She lives in Chestertown, Maryland, with her husband and three children.

This is ultimately a story of class in an England that is changing due to both World Wars. It is two different stories; one of a mother, the other of the daughter and each one takes place during one of the Great Wars. Lady Katherine Trenowyth grows up with all of the privilege that being the daughter of an Earl can bring her but it also brings confining expectations. Katherine meets a man – an artist’s assistant that encourages her in her own burgeoning talent and he opens her heart. With his support she runs away from all she knows and takes a chance on love but she learns that sometimes love is not all you need.

Anna Trenowyth is a nurse during WWII and has been sent back to England from France after being injured in an attack. She is assigned to a hospital set up in house of the family she has never met. He mother died when she was very young and she knows nothing of her history or of her ancestors. She heads to her assignment not knowing what she will find or how she will be received.

I enjoyed this story – the back and forth in time is done very well.  Sometimes that in a story can drive me to distraction but it was an important part of this tale and was done in such a way as to dole out bits and pieces of the story like Hansel and Gretel’s crumbs in the forest. You knew something big was coming – and truth be told I did figure it out – but you didn’t know what until the end. It’s got a great cast of characters that are unique and well developed. I read the book in one day; it kept me turning the pages through a rainy afternoon. Great plot, good characters and a satisfying ending. What more can you ask?