Something Worth Saving by Sandi Ward – Blog Tour and Book Review

I believe this is my first book written by a cat – or from the point of view of a cat. A whole novel that is! I was quite intrigued by the premise of Something Worth Saving by Sandi Ward. I thank TLC Book Tours for sending me a copy at no charge for my honest review. 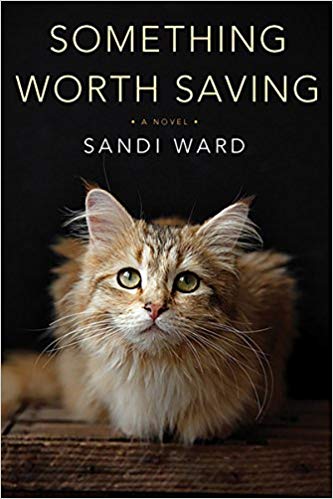 About Something Worth Saving:

Sandi Ward’s shrewdly observed, funny, and wonderfully touching novel tells of a fractured family, a teenage boy, and a remarkable cat whose loyalty knows no bounds . . .

A boy and his cat. It’s an unconventional friendship, perhaps, but for Charlie and Lily, it works beautifully. It was Charlie who chose Lily from among all the cats in the shelter. He didn’t frown, the way other humans did, when he saw her injured back leg, the legacy of a cruel previous owner. Instead, Charlie insisted on rescuing her. Now Lily wants to do the same for Charlie.

She’s the only one who’s seen the bruises on Charlie’s body. If she knew who was hurting him, she’d scratch their eyes out. But she can’t fix this by herself. Lily needs to get the rest of the family to focus on Charlie—not easy when they’re wrapped up in their own problems. Charlie’s mother kicked his father out weeks ago and has a new boyfriend who seems charming, but is still a stranger. Oldest son Kevin misses his father desperately. Victoria, Charlie’s sister, also has someone new in her life, and Lily is decidedly suspicious. Even Charlie’s father, who Lily loves dearly, is behaving strangely.

Lily knows what it’s like to feel helpless. But she also knows that you don’t always have to be the biggest or the strongest to fight fiercely for the ones you love . . .

Sandi grew up in Manchester-by-the-sea, Massachusetts, and received her MA in Creative Writing at New York University. She’s the author of book club novels published by Kensington Books, stories of dysfunctional families told from the point of view of the family cat. She’s also a medical copywriter at an advertising agency. She lives on the Jersey Shore with her husband, teenagers, dog and a large black cat named Winnie.

On December 18, 2018 her latest novel, SOMETHING WORTH SAVING, will be on sale in trade paperback, e-book and audio book.

I’ve read stories “written” by cats before but they were all about cats. Unlike those tales, in Something Worth Saving Lily the cat narrates the entire tale which is all about the humans in her life. Lily belongs to Charlie – he rescued her from the shelter even though she has a hurt leg and walks funny. So many others had passed her by but not Charlie. But Lily is worried about Charlie, she has seen bruises on his body and doesn’t know who is hurting him. She is also worried about the other members of the family; something is wrong the dad and the mom is upset. Charlie’s brother and sister are also not acting right.

I will admit that having the book written in Lily’s voice took a little getting used to. As most of us know cats are independent creatures and a bit dispassionate. That does allow the story to take center stage. Since Lily is just an observer and only occasionally a participant it lets the narrative play out without lots of extra fluff.

While this is a story narrated by a cat, it is a story full of very adult themes. The overarching plot involves a marriage that is disintegrating due to alcohol/drug addiction. As noted above young Charlie is being abused. Then there are the impacts of the tensions between the parents on the kids.

Lily wanders though everyone’s orbit worrying about how she can help Charlie while worrying about the other humans in her life. Then a new male human starts coming around. One that the mom really likes. But not everyone likes this new man even though Lily likes him very much.  How is she going to figure it all out and help Charlie?

Lily was a good narrator of the story. She never gets distracted, she just passes on the information and tries to find a way to help. She does love her Charlie and only wants what is best for him. At times though the book reads a little dryly due to it being in Lily’s voice. She is rather like an outside investigator even though she is part of the family.

The bits and pieces of why the marriage is breaking up are doled out in snippets throughout the book and I was left wanting a little more information. The ending was satisfactory. Lily was left happy so that a very good thing. As to the humans – you will have to read the book to find out.