I don’t often go for books like The Ancestor by Lee Matthew Goldberg but some instict told me to accept a copy from TLC Book Tours at no charge for my honest review. Much like one of my favorite books from 2018 it defies classification but it is well worth reading. 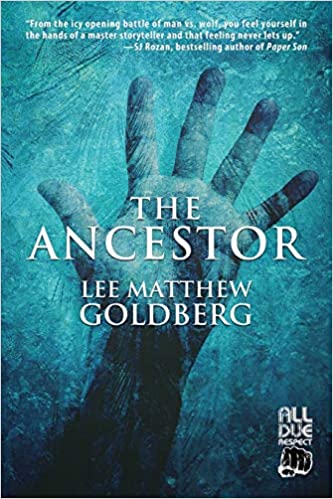 A man wakes up in present-day Alaskan wilderness with no idea who he is, nothing on him save an empty journal with the date 1898 and a mirror. He sees another man hunting nearby, astounded that they look exactly alike except for his own beard. After following this other man home, he witnesses a wife and child that brings forth a rush of memories of his own wife and child, except he’s certain they do not exist in modern times—but from his life in the late 1800s.

After recalling his name is Wyatt, he worms his way into his doppelganger Travis Barlow’s life. Memories become unearthed the more time he spends, making him believe that he’d been frozen after coming to Alaska during the Gold Rush and that Travis is his great-great grandson. Wyatt is certain gold still exists in the area and finding it with Travis will ingratiate himself to the family, especially with Travis’s wife Callie, once Wyatt falls in love. This turns into a dangerous obsession affecting the Barlows and everyone in their small town, since Wyatt can’t be tamed until he also discovers the meaning of why he was able to be preserved on ice for over a century.

A meditation on love lost and unfulfilled dreams, The Ancestor is a thrilling page-turner in present day Alaska and a historical adventure about the perilous Gold Rush expeditions where prospectors left behind their lives for the promise of hope and a better future.

The question remains whether it was all worth the sacrifice…

Lee Matthew Goldberg is the author of THE DESIRE CARD, SLOW DOWN and THE MENTOR from St. Martin’s Press. He has been published in multiple languages and nominated for the 2018 Prix du Polar. The second novel in The Desire Card series, PREY NO MORE, is forthcoming. THE ANCESTOR will be out from All Due Respect books in 2020 along with a reissue of his debut novel. His pilots and screenplays have been finalists in Script Pipeline, Book Pipeline, Stage 32, We Screenplay, the New York Screenplay, Screencraft, and the Hollywood Screenplay contests. After graduating with an MFA from the New School, his writing has also appeared in the anthology DIRTY BOULEVARD, The Millions, The Montreal Review, The Adirondack Review, Essays & Fictions, The New Plains Review, and others. He is the co-curator of The Guerrilla Lit Reading Series (guerrillalit.wordpress.com). He lives in New York City. Follow him at leematthewgoldberg.com and on Facebook, Twitter, and Instagram.

I want to start by noting that this book is out of my usual reading box. Once in a blue moon I like to stretch my reading with something that is different. The Ancestor does have a bit of a historical hook but it’s really a tale of the current day. A man wakes up and has little knowledge of who he is or where he is for that matter. As he slowly comes to he hears shots in the distance – men are hunting and one of them looks just like him! But he doesn’t recognize the kind of guns they are using and what is that think they use to get around? Where are their horses? He knows he needs to find out where he is and who he is so he hops in the back of their strange conveyance.

As he comes more alive he realizes who he is and who he has found. He is Wyatt Barlow and he has found his descendant. But how….why, and what is he going to do about it? His great, great grandson Travis is his exact look a-like and as he worms his way into the family he starts to get ideas.

I could not stop reading this book from the very first paragraph. It’s creepy, it’s totally enthralling, it’s completely mind blowing and while I thought I knew what was going to happen – I didn’t expect the very last thing that did. Well played Mr. Goldberg, well played.

I am not generally a fan of books that invade my dreams as I tend to be a very susceptible reader which is why I have given up thrillers and murder mysteries but this book will be worth what happens when I go to sleep tonight ’cause I am sure I am going to have creepy dreams. The thing is, Mr. Goldberg was so delightfully subtle and so completely overt it was genius. I am going to read it again I believe because I know there are things I missed because I was turning the pages so fast. This is going to be one of my top five books of the year – I can tell that already. And that does surprise me because it is so far out of my usual.

Give this book a try, it’s just really, really good.

One lucky US reader will win a copy of The Ancestor. Just enter as many ways as you would like on the Gleam widget below. Good luck everyone.