There was something about the synopsis of this book that intrigued me so I was happy to receive a free copy of The Daisy Children by Sofia Grant from TLC Book Tours for my honest review. 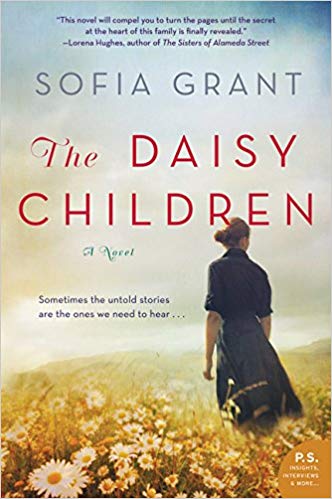 About The Daisy Children:

nspired by true events, in Sofia Grant’s powerfully moving new novel a young woman peels back the layers of her family’s history, discovering a tragedy in the past that explains so much of the present. This unforgettable story is one of hope, healing, and the discovery of truth.

When Katie Garrett gets the unexpected news that she’s received an inheritance from the grandmother she hardly knew, it couldn’t have come at a better time. She flees Boston—and her increasingly estranged husband—and travels to rural Texas.

There, she’s greeted by her distant cousin Scarlett. Friendly, flamboyant, eternally optimistic, Scarlett couldn’t be more different from sensible Katie. And as they begin the task of sorting through their grandmother’s possessions, they discover letters and photographs that uncover the hidden truths about their shared history, and the long-forgotten tragedy of the New London school explosion of 1937 that binds them.

You can purchase The Daisy Children at Harper Collins

Sofia Grant has the heart of a homemaker, the curiosity of a cat, and the keen eye of a scout. She works from an urban aerie in Oakland, California.

I like when I find a book that is based on a real event. The school explosion that starts this book did indeed happen. When Ms. Grant learned about it she developed her fiction. I will admit to some time with Mr. Google after reading this book to read about the explosion. It must have been horrific for all involved. It did lead to safer natural gas practices for it was this accident that led to adding the smell to gas so that people can recognize when a leak is happening.

The Daisy Children is a generational tale of mothers and daughters and the damage they can do to each other. Caroline starts the train wrecking with how she treats her daughter Margaret. Margaret is the child that was born after the school explosion that killed her daughter Ruby. Caroline is also the leading lady of society in New London, Texas. Margaret and the rest of the children born 9 months after the disaster are known as the Daisy Children and they form a sort of club in town. They are trotted out once a year when the event is painfully remembered. Margaret is not a pleasant child – she hides and gathers secrets. She is sly and unpleasant. She somehow knows she is second best. Still she strives to live up to what her mother expects…until she falls in love.

Margaret does not marry the man her mother wants for her but rather someone she has loved for a very long time. He is, though not a good provider. They have one child, Georgina and she and Margaret do not get along. As Margaret struggles and her relationship with her daughter deteriorates she ultimately finds herself back at home. As Georgina grows up she rebels and leaves.

Georgina’s daughter Katie is the driver of the other side of the story as she learns that her grandmother – whom she had only met once – has left her an inheritance. She is dissatisfied with her life in Boston; she was just fired and her marriage is less than perfect. Her relationship with her mother is good but her mother is a bit flighty and she will not tell Katie anything about her grandmother. She also barely knows her cousin Scarlett but that doesn’t stop Scarlett from welcoming Katie wholeheartedly to her life.

This a complicated, multi-layered tale covering several generations and a number of issues. But at the heart it’s about mothers and daughters. One of the more complicated relationships that exist on this earth; when it is good, it can be very good but when it is bad – watch out. Katie seems to have broken the curse of mother/daughter relationships in her family tree but I wonder – her mother seems to be a rather selfish woman who tells her own version of the truth.

The book starts with one disaster – the horror at the school. Then it moves on to an an ongoing mess with the creation of a club for the “replacement” babies. It can only go up from there, right? In some ways yes, in others, no. There are many moving parts in the book and some just keep ambling on without any real purpose or resolution. Others come to the fore only to be displaced by something else in the crowded field. I can’t help but feel that there’s a story I lost while reading but I’m just not sure what it was.

That is not to write that I disliked the book – I didn’t. It just left me feeling a bit off balance and perhaps that was the author’s intent. The ending doesn’t wrap everything up so much as leave a lot of questions. There was a LOT going on in the book and so much to address and play out – perhaps a few more pages were necessary.