I am always intrigued by stories that involve multiple timelines. I was very happy to accept a copy of The Forgotten Letters of Esther Durrant by Kayte Nunn from TLC Book Tours at no charge for my honest review. 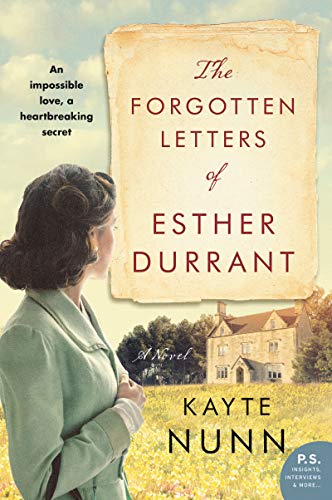 About The Forgotten Letters of Esther Durrant:

A cache of unsent love letters from the 1950s is found in a suitcase on a remote island in this mysterious love story in the tradition of the novels by Kate Morton and Elizabeth Gilbert.

1951. Esther Durrant, a young mother, is committed to an isolated mental asylum by her husband. Run by a pioneering psychiatrist, the hospital is at first Esther’s prison but soon surprisingly becomes her refuge.

2018. Free-spirited marine scientist Rachel Parker embarks on a research posting in the Isles of Scilly, off the Cornish coast. When a violent storm forces her to take shelter on a far-flung island, she discovers a collection of hidden love letters. Captivated by their passion and tenderness, Rachel determines to track down the intended recipient. But she has no idea of the far-reaching consequences her decision will bring.

Meanwhile, in London, Eve is helping her grandmother, a renowned mountaineer, write her memoirs. When she is contacted by Rachel, it sets in motion a chain of events that threatens to reveal secrets kept buried for more than sixty years.

With an arresting dual narrative that immediately captivates the reader, The Forgotten Letters of Esther Durrant is an inspirational story of the sacrifices made for love.

Kayte Nunn is a former magazine and book editor, and the international bestselling author of four novels, among them The Botanist’s Daughter and The Forgotten Letters of Esther Durrant. Originally from Britain, she has also lived in the USA, and now resides in Australia, in Northern New South Wales, with her family.

The Lost Letters of Esther Durrant is at its heart a love story. A love story that spans generations and one that looks to the future. It starts with a horrifying betrayal and if one truly thinks about it, ends with one as well. But overall the story is one of love, resiliance and finding a way forward in spite of what has happened in the past.

There are three distinct stories that are told within the book; one of a young mother who thinks she is going on a vacation with her husband but he leaves her on a desolate island with a doctor friend as he does not know how he can help her. To explain why would share far too much of the plot but it’s the kind of thing that men could do with wives prior to women having any kind of rights of their own. The kind of thing that was done before the world understood depression and its impacts.

The second story is of a young woman researcher who doesn’t like to stay in one place for too long. She finds herself working on coast of England researching clams around a series of islands – some inhabited, some not. After a bad decision to head out on the water without checking the weather she finds herself rescued by a recluse on one of the smaller islands. This leads to the discovery of some letters in a suitcase where she is told to find some clothes to wear. The letters have been addressed but they were never sent.

The final arc involves a young woman taking care of her grandmother who has taken a fall. Her grandmother was a pioneering woman in her day  – she is well known as a housewife mountain climber. As she heals from her fall the two of them are working on her autobiography. But there is a large part of her story that her granddaughter does not know.

I found this to be a truly engaging book. I read it mostly in the car on a somewhat long drive. It made the time fly and I hardly noticed the miles passing. It made was surely to be a blah time so much better. I was very involved in the lives of the people of the story and even though I saw most of the plot points coming ahead of time it was still a very satisfying read. The characters were interesting and unique and I was so happy with the endings. Yes there are more than one as there are several plots to be resolved. The book does cover some dark topics as it deals with issues of PTSD – althought they didn’t call it that after WWII. Just know that while it is a love story it is also a story of loss.