I was quite interested in reading The King James Men by Samantha Grosser. I thank Historical Fiction Virtual Book Tours for sending me a copy at no charge for my honest review. 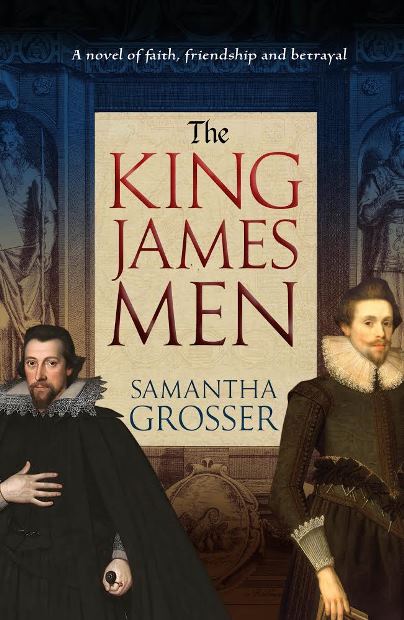 About The King James Men:

Connected by love, divided by faith. A novel of faith, friendship, and betrayal set against the religious turbulence of 17th Century London.

Two men, once friends, have long since gone their separate ways. But when the new King James commands a fresh translation of the Bible, their paths are fated to cross again.

For biblical scholar Richard Clarke, the chance to work on the new translation seems like a gift from God, a way back in from the cold where his friendship with Separatist Ben Kemp has kept him for many years. But Richard soon discovers there is a price to pay for his new-found favour, and that price is betrayal. Caught between love for his friend and his faith in his Church, Richard must make a decision that could cost him his soul.

Set against the background of the writing of the King James Bible, and inspired by true accounts of the community who became the Mayflower Pilgrims, The King James Men is a vivid portrayal of the religious struggles of the age, and the price of being true to your faith.

Historical fiction author Samantha Grosser originally hails from England, but now lives on the sunny Northern Beaches of Sydney with her husband, son and a very small dog called Livvy.

Combining a lifelong love of history with a compulsion to write that dates from childhood, Samantha is now bringing her passion for telling compelling stories to the world.

Samantha has an Honours Degree in English Literature and taught English for many years in Asia and Australia. She is the author of wartime dramas Another Time and Place, and The Officer’s Affair. The King James Men, set during the turbulent years of the early years of 17th Century, is her third novel.

The early 17th century in England was an interesting time. King James ascended the throne after the death of Elizabeth I and the religious issues that bubbled during her reign were still percolating. The King was still the head of the Church of England but there were still Catholics and now the break with that church due to the impact of Martin Luther. In addition the Puritans were pushing for their beliefs feeling that the reforms to the Church of England didn’t go far enough and therefore they knew best.

It was during this religious quagmire that King James decided a new Bible translation was needed.  And when the King wants something, the King gets something. That book is of course, what we know today as the King James Bible.

The King James Men tells the tale of one of those men, Dr. Richard Clarke (based on a real man who did indeed work on the translation.)  Dr. Clarke’s reputation is a bit stained by his past friendship with a man who is now one of those Puritan Separatists. Ben Kemp was his friend at University but even then they would argue about the nature of man’s relationship with God. Richard fully believes in all that the Church of England stands for while Ben believes in the more personal relationship with God absent the trappings of the church. They parted in anger and Ben is seen as a traitor.

When Richard is chosen to be one of the translators and writers of the new Bible is his honored and relieved that his past is finally being forgiven. It is only when the Archbishop of Canterbury asks him to live with the family of his old friend so he can report on his activities that Richard wonders if he was chosen solely for his knowledge of Hebrew and the Bible.

What follows is a story about friendship, love, loyalty, conflict, betrayal and enlightenment. Richard decides he doesn’t have much choice but to do what is asked of him. He hopes that his friend has changed his convictions but he knows in his heart that Ben is strong in his beliefs.

Ben has been overseas on his father’s business for several years but is now back in London. He has lost none of his fervor for reform. His reunion with his friend is wary but not totally unwelcome. As they work back towards balance it all falls apart in the worst way.

I enjoyed – well, perhaps enjoyed is not the right word for what is a somewhat dark and depressing read at times. It is very well written and for anyone with an interest in religion and the bits and pieces that make organized religion the force that it is, this is good read about the movement that ultimately led to the Puritans coming over on the Mayflower. That particular event is still many years in the future from the events in this book but the groundwork is being laid.