I received a free copy for my honest review. All book links are affiliate links. 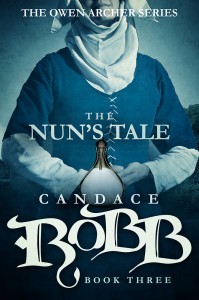 Based on an enigmatic entry in the records of Clementhorpe Nunnery, this authentic, gripping mystery conjures a 14th century ripe with forbidden passions and political intrigue.

When young nun Joanna Calverley dies of a fever in the town of Beverley in the summer of 1365 she is buried quickly for fear of the plague. But a year later, Archbishop Thoresby learns of a woman who has arrived in York claiming to be the resurrected nun, talking of relic-trading and miracles. And death seems to ride in her wake.

The archbishop sends Owen Archer to retrace the woman’s journey, an investigation that leads him across the north from Leeds to Beverley to Scarborough. Along the way he encounters Geoffrey Chaucer, a spy for the king of England, who believes there is a connection between the nun’s troubles, renegade mercenaries, and the powerful Percy family. Back in York, however, Owen’s wife Lucie, pregnant with their first child, has won the confidence of the mysterious nun and realizes that there are secrets hidden in the woman’s seemingly mad ramblings…

Writing as Emma Campion, Candace has published two historical novels about the women of the English court in the 14th century, A Triple Knot and The King’s Mistress.
Born in the Blue Ridge Mountains of North Carolina, Candace grew up in Cincinnati, Ohio, and has lived most of her adult life in Seattle, Washington, which she loves for its combination of culture, natural beauty, and brooding weather so like Yorkshire, Wales, and Scotland, which she visits as often as possible. She has taught the art of writing the crime novel in the University of Washington’s certificate program, and offers workshops in writing the historical novel and in creating and plotting the crime series. Candace (and Emma) blog about writing and medieval topics at A Writer’s Retreat.

This is the third of the Owen Archer mysteries and I must admit this one was a bit darker than the first two. It wasn’t a straightforward murder mystery like the others either – in this one we have nun who everyone thought was dead suddenly showing up alive. This might be something that would go over right now but in Owen Archer’s time it just didn’t happen. Unless there was evil involved. So is this woman the 14th century equivalent of a zombie or is she a touch mad?

Owen and his lady wife Lucie are dispatched to try to get to the bottom of this woman’s story – she is the titular nun. What is her tale. Is she telling the truth or is she trying to cheat someone or something. As her story unfolds others involved in her tale start turning up…dead. So what started out as only a mystery now has become a murderous problem for Owen.

Ms. Robb continues the development of her core characters while still giving adequate attention to the new ones that inhabit this mystery. Historical figures make appearances in this tale much like the other books as the author likes to tie her fictional figures and stories to real people an events.

This was another excellent tale from the talented pen of Candace Robb. This has been my favorite of the three I have read so far. I do want to mention how much I appreciate the author’s note at the end. I so love having the facts to read to understand the times the fictional folk are wandering through.

You can read my review of The Lady Chapel 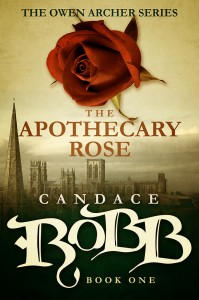 I received a free ecopy for my honest review. Any links to books are affiliate links.        I will be reviewing 9 of the 10 books in the Owen Archer Series. They are being re-released to celebrate the two newest books – The […] 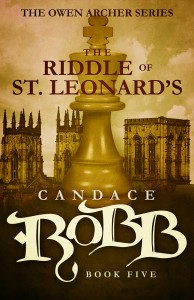 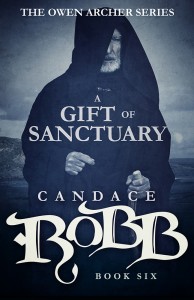