Now and then I do enjoy a twisty book, especially if it includes a bit of historical fiction. The Woman in the Lake by Nicola Cornick is a dual timeline tale that was just that. I thank TLC Book Tours for sending me a copy at no charge for my honest review. 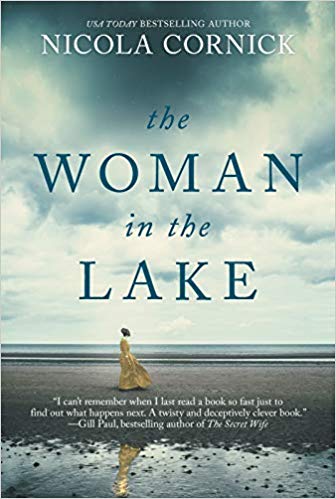 About The Woman in the Lake:

Lady Isabella Gerard, a respectable member of Georgian society, orders her maid to take her new golden gown and destroy it, its shimmering beauty tainted by the actions of her brutal husband the night before.

Three months later, Lord Gerard stands at the shoreline of the lake, looking down at a woman wearing the golden gown. As the body slowly rolls over to reveal her face, it’s clear this was not his intended victim…

When a gown she stole from a historic home as a child is mysteriously returned to Fenella Brightwell, it begins to possess her in exactly the same way that it did as a girl. Soon the fragile new life Fen has created for herself away from her abusive ex-husband is threatened at its foundations by the gown’s power over her until she can’t tell what is real and what is imaginary.

As Fen uncovers more about the gown and Isabella’s story, she begins to see the parallels with her own life. When each piece of history is revealed, the gown—and its past—seems to possess her more and more, culminating in a dramatic revelation set to destroy her sanity.

International bestselling author Nicola Cornick writes historical romance for HQN Books and time slip romance for MIRA UK. She became fascinated with history when she was a child, and spent hours poring over historical novels and watching costume drama. She studied history at university and wrote her master’s thesis on heroes. Nicola also acts as a historical adviser for television and radio. In her spare time she works as a guide in a 17th century mansion.

The Woman in the Lake is a dual time line tale with a gold silk dress spanning the generations. In the 18th century Lady Isabella is living with an abusive husband. One night he gives her an unexpected gift; a beautiful golden gown. Her husband rapes her while wearing it so it loses it’s beauty in her eyes so her maid feels it will be easy to follow her master’s orders to destroy the gown. But she finds that her mistress does not want it destroyed, just put away. This creates a problem for the lady’s maid – for she has been given an order.

In the 21st century we meet Fenella as a young girl as she goes on a school trip. As she is walking through the estate she experiences some kind of time warp and finds walking into a room and the 18th century. There she finds and steals the beautiful golden gown. It seems to hold some kind of power over her and almost talk to her, compelling her to do things. She puts it away in a drawer and forgets about it. Until many years in the future when her grandmother dies and her sister is cleaning out the house and finds a box that is to be sent to Fenella. Inside is the beautiful golden gown.

As her life starts to spiral Fenella wonders if the gown has something to do with it. As she learns more about its origins she finds that she has more in common with the original owner than she cares to admit. But she has one thing that Lady Isabella does not – a supportive man.

This was a really good read. The stories in both eras were of equal interest – this is unusual for me. I tend to prefer the historical time line. The writing was moody and dark and full of characters both evil and  quite normal. The plot moved along quite nicely, moving between periods smoothly and appropriately.  There is a lot going on in this book – far more than I’ve gone into or the synopsis indicates. I just don’t want to give everything away. It’s a great book to curl up with for an afternoon’s reading. It’s got too many ghostly goings on to be a before bed kind of read – at least for me. But it’s a book that kept my interest until the very end.