Within These Lines by Stephanie Morrill – Blog Tour and Book Review

Within These Lines by Stephanie Morrill isn’t a WWII book per se but it does deal with one of the more horrific actions this country took during that time. I thank TLC Book Tours for sending me a copy at no charge for my honest review. 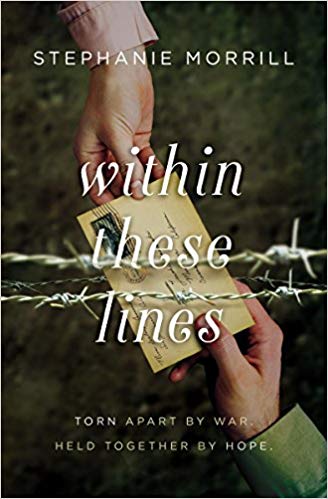 About Within These Lines:

From Stephanie Morrill, author of The Lost Girl of Astor Street, comes Within These Lines, the love story of a girl and boy torn apart by racism during World War II.

Evalina Cassano’s life in an Italian-American family living in San Francisco in 1941 is quiet and ordinary until she falls in love with Taichi Hamasaki, the son of Japanese immigrants. Despite the scandal it would cause and that inter-racial marriage is illegal in California, Evalina and Taichi vow they will find a way to be together. But anti-Japanese feelings erupt across the country after the attack on Pearl Harbor, and Taichi and his family are forced to give up their farm and move to an internment camp.

Degrading treatment makes life at Manzanar Relocation Center difficult. Taichi’s only connection to the outside world is treasured letters from Evalina. Feeling that the only action she can take to help Taichi is to speak out against injustice, Evalina becomes increasingly vocal at school and at home. Meanwhile, inside Manzanar, fighting between different Japanese-American factions arises. Taichi begins to doubt he will ever leave the camp alive.

With tensions running high and their freedom on the line, Evalina and Taichi must hold true to their ideals and believe in their love to make a way back to each other against unbelievable odds.

Stephanie Morrill is the creator of GoTeenWriters.com and the author of several young adult novels, including the historical mystery, The Lost Girl of Astor Street. Despite loving cloche hats and drop-waist dresses, Stephanie would have been a terrible flapper because she can’t do the Charleston and looks awful with bobbed hair. She and her near-constant ponytail live in Kansas City with her husband and three kids.

Within These Lines is at its heart a love story. Not a conventional love story, but one nonetheless. Evalina is the daughter of Italian family and Taichi is second generation Japanese American. They are just starting to get to know one another when the Pearl Harbor attack happens. As any of us who know the horrible history of the internment of the Japanese immigrants and Japanese Americans during WWII will know what follows. Taichi and his family are “evacuated” to the Manzanar camp “for their safety.”  I read these stories because I feel they need to be read because this history cannot be forgotten.

This book is written for the YA audience and yet it held my interest quite well. The relationship between Evalina and Taichi was sweet and despite the hardships they had to overcome to be together in this time they persevered. Since it was written for the younger reader it was a little more simplistic in the plot and the overall sharing of the horrors of the internment camps but the point of removing people from everything they have simply due to their ethnicity comes through quite strongly. It’s a book that resonates with the current atmosphere in the country.

It is a a good book to introduce the young adult reader to this sad period in history with a romantic plot. It will, I am sure, encourage them to further research the internment camps and hopefully it will never again happen here.