I admit to a certain fascination with old time Hollywood so I was happy to receive a copy of Woman Enters Left by Jessica Brockmole from Historical Fiction Virtual Book Tours at no charge for review. 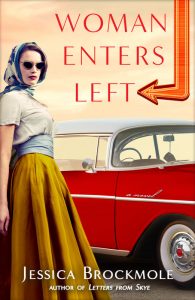 A woman sets out on a cross-country road trip, unknowingly tracing in reverse the path her mother traveled thirty years before.

In the 1950s, movie star Louise Wilde is caught between an unfulfilling acting career and a shaky marriage when she receives an out-of-the-blue phone call: She has inherited the estate of Florence “Florrie” Daniels, a Hollywood screenwriter she barely recalls meeting. Among Florrie’s possessions are several unproduced screenplays, personal journals, and—inexplicably—old photographs of Louise’s mother, Ethel. On an impulse, Louise leaves a film shoot in Las Vegas and sets off for her father’s house on the East Coast, hoping for answers about the curious inheritance and, perhaps, about her own troubled marriage.

Nearly thirty years earlier, Florrie takes off on an adventure of her own, driving her Model T westward from New Jersey in pursuit of broader horizons. She has the promise of a Hollywood job and, in the passenger seat, Ethel, her best friend since childhood. Florrie will do anything for Ethel, who is desperate to reach Nevada in time to reconcile with her husband and reunite with her daughter. Ethel fears the loss of her marriage; Florrie, with long-held secrets confided only in her journal, fears its survival.

In parallel tales, the three women—Louise, Florrie, Ethel—discover that not all journeys follow a map. As they rediscover their carefree selves on the road, they learn that sometimes the paths we follow are shaped more by our traveling companions than by our destinations.

Jessica Brockmole is the author of At the Edge of Summer, the internationally bestselling Letters from Skye, which was named one of the best books of 2013 by Publishers Weekly, and Something Worth Landing For, a novella featured in Fall of Poppies: Stories of Love and the Great War. She lives in northern Indiana with her husband, two children, and far too many books.

Woman Enters Left is so much more than a story about a Hollywood star returning home for Christmas. Louise Wilde is contacted by a lawyer and she finds herself the beneficiary of the estate of a woman she really didn’t know, a screenwriter named Florrie Daniels. While at the meeting which takes place at the woman’s apartment she finds an envelope full of photos – of her mother who died when Louise when a child. Louise also finds a diary and several screenplays that excite her in a way her current work definitely does not.

Her work at the studio is not the only thing that Louise is finding unsatisfying in her life – her husband, has returned from Korea, where he went as a correspondent, with severe injuries and he has withdrawn from life, work and her. When Louise decided to follow a whim and drive back to her home in New Jersey for the holidays it shakes up her work life and her home life.

What Louise does not know is that her parents and Florrie were all good friends from a very young age. They all went to school together and their relationships to each other were complicated. As Louise heads East the book alternates chapters and the reader experiences the trip that Louise’s mother and Florrie made as they drove West to Nevada. I don’t want to share the purpose as it will spill too much. The diary that shares the story is part of what Louise found at Florrie’s apartment; it has notes from both women and a curious and somewhat entertaining list of what they bought along the way with the costs – their trip took place in the mid-1920s.

The book is all about relationships. Mother/daughter, husband/wife, friends and many more. None are easy and all are complicated. This book reads like an easy beach read but there is so much going on it really needs deep attention. So many little things can sneak by and you find yourself thinking back to a small moment from a chapter back and going, aaaaaah. It is so well written you don’t realize just how deep it is.

With that being said, there isn’t much character development beyond the basic information given to create the main players. I know that’s an odd thing to write after so many glowing words above but it is a bit of a lack – it doesn’t overly detract from this particular tale due to what it is, although I would have liked to know more about Florrie and Louise’s mom, Ethel. And her father for that matter. It is a page turner though and definitely worth reading.