I received a free copy of The Woman in the Photo for my honest review. 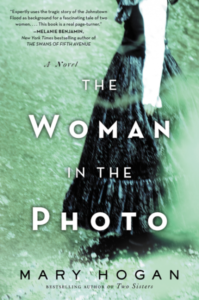 The lives of two young women—bound by heritage and history—are changed forever by one epic event . . .

1889: Elizabeth Haberlin, of the Pittsburgh Haberlins, spends every summer with her family on a beautiful lake in an exclusive club. Nestled in the Allegheny Mountains above the working-class community of Johnstown, Pennsylvania, the private retreat is patronized by society’s elite. Elizabeth summers with Carnegies, Mellons, and Fricks, following the rigid etiquette of her class. But Elizabeth is blessed (or cursed) with a mind of her own. Case in point: her friendship with Eugene Eggar, a Johnstown steel mill worker. And when Elizabeth discovers that the club’s poorly maintained dam is about to burst and send 20 million tons of water careening down the mountain, she risks all to warn Eugene and the townspeople in the lake’s deadly shadow.

Present day: On her eighteenth birthday, genetic information from Lee Parker’s closed adoption is unlocked. She also sees an old photograph of a biological relative—a nineteenth-century woman with hair and eyes likes hers—standing in a pile of rubble from an ecological disaster next to none other than Clara Barton, the founder of the American Red Cross. Determined to identify the woman in the photo and unearth the mystery of that captured moment, Lee digs into history. Her journey takes her from her hometown in California to Johnstown, from her present financial woes to her past of privilege, from the daily grind to an epic disaster. But once Lee’s heroic DNA is revealed, will she decide to forge a new fate?

Mary Hogan is the NAPPA Award-winning author of seven young-adult books. Two Sisters is her first novel for adults. She lives in New York City with her husband, Bob, and their dog, Lucy.

This is a book about two women; one in current times and one in the past. Both are looking for something and the question is, do they find what they seek? I was drawn to the book due to the historical aspects – of course. I am a sucker for an historical novel. The book starts out in the past in a world of privilege – the world of the rich families that make up Pittsburgh society. Elizabeth Haberlin has nothing more pressing to worry about than what dress to wear to her coming out party. A party that will be attended by the notable families of the city and where she will hope to find a husband. Her family summers high above the lowly working class people of Johnstown at their club. A club that that boasts a “lake in the sky.” A lake that will ultimately be the destruction of Johnstown.

The story moves to the present to a young woman just about to turn 18 who has had her whole life turn upside down. She knows she is adopted and when her birthday arrives she can receive some information about her birth family. On that appointed day she rushes to the county office only to learn very little. It’s only a chance look at a picture of a woman in a photo that sets her off on a search for her roots.

I have to admit that I found the book to be quite interesting. I grew up in Philadelphia so I knew some of the history of the Johnstown flood and how devastating it was to the area. I didn’t realize that the arrogance of the elite owners of the club was part of the cause of the dam’s collapse. I found myself researching further as I often do when a book offers me a window into history.

The writing style is one that keeps the reader glued to the story. Ms. Hogan kept the two voices of her protagonists separate and each time period has its own rhythm which is very special. I enjoyed this story – the characters were diverse and developed well over time. A great read for summer!

Yum
Share
Email
Mary HoganThe Woman in the Photo
How to Add a Pond – Step One, Dig a Hole
Quick and Easy Chicken Recipe