I am honored to welcome Jon Erwin and William Doyle today as they tour with TLC Book Tours with their new book, Beyond Valor. Read on to learn about this book based on their family history and then enter to win a copy of your very own (US readers) 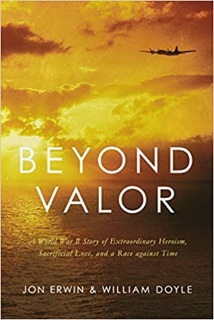 On April 12, 1945, a fleet of American B-29 bombers flew toward Japan. Their mission was simple: stop World War II by burning the cities, factories, and military bases of the Japanese em­pire, thereby forcing an unconditional surren­der. Yet the mission did not go as planned. On board one of the B-29s, the City of Los Angeles, a phosphorus bomb detonated inside the plane. Staff Sergeant Henry E. “Red” Erwin absorbed the blast of burning phosphorus yet managed to throw overboard the still-flaming bomb, be­fore collapsing from the third-degree burns over much of his body.

Breaking protocol, the plane diverted to a military hospital at Iwo Jima. President Truman quickly ordered that Erwin be awarded the Medal of Honor, the highest honor of the American military, before the young airman died of his wounds. There was just one problem: no Medals of Honor were available in the entire Pacific theater. General Curtis LeMay dispatched a squad of airmen on a 1,000-mile mission to smash their way into a display case and steal a medal to give to Erwin before time ran out.

Meanwhile, Red’s courageous young bride set out on her own mission, one of against-all-odds healing. Her success would determine the fate of the twenty-three-year-old warrior–and years later make possible the birth of the book’s author: their grandson, Jon Erwin.

Drawn from in-depth interviews with eyewitnesses and deep archival research, Beyond Valor is an extraordinary tale of bravery, heroism, faith, and devotion.

Jon Erwin, the grandson of Medal of Honor recipient Henry E. “Red” Erwin isan American film director and producer. With his brother Andrew, he is among only eight directors to receive the incredibly rare A+ Cinemascore not once but twice, joining a list that includes Steven Spielberg and Robert Zemeckis. Their film I Can Only Imagine was the #1 independent movie of 2018. The brothers have a multi-year film and TV deal at Lionsgate and are developing Beyond Valor into a major motion picture

William Doyle is the award winning, New York Times bestselling author of ten nonfiction books, and has produced TV shows for HBO, the History Channel, and PBS. He is coauthor with Chris Kyle of American Gun and, with Dick Couch, of Navy SEALs. He is also author of the highly acclaimed 2015 book PT 109: An American Epic of War, Survival, and the Destiny of John F. Kennedy. Doyle is a Fulbright Scholar and the son of a US Army combat veteran who served in the Pacific theater during World War II.

One lucky US reader will win a copy of Beyond Valor. Just enter as many ways as you would like on the Gleam widget below. Full rules are on the widget. Good luck everyone.