I received a free copy of The Dressmaker’s Dowry from TLC Book Tours for my honest review. 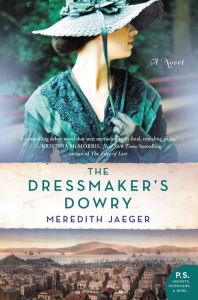 For readers of Lucinda Riley, Sarah Jio, or Susan Meissner, this gripping historical debut novel tells the story of two women: one, an immigrant seamstress who disappears from San Francisco’s gritty streets in 1876, and the other, a young woman in present day who must delve into the secrets of her husband’s wealthy family only to discover that she and the missing dressmaker might be connected in unexpected ways.

An exquisite ring, passed down through generations, connects two women who learn that love is a choice, and forgiveness is the key to freedom…

Immigrant dressmakers Hannelore Schaeffer and Margaret O’Brien struggle to provide food for their siblings, while mending delicate clothing for the city’s most affluent ladies. When wealthy Lucas Havensworth enters the shop, Hanna’s future is altered forever. With Margaret’s encouragement and the power of a borrowed green dress, Hanna dares to see herself as worthy of him. Then Margaret disappears, and Hanna turns to Lucas. Braving the gritty streets of the Barbary Coast and daring to enter the mansions of Nob Hill, Hanna stumbles upon Margaret’s fate, forcing her to make a devastating decision…one that will echo through the generations.

In her elegant Marina apartment overlooking the Golden Gate Bridge, Sarah Havensworth struggles to complete the novel she quit her job for. Afraid to tell her husband of her writer’s block, Sarah is also hiding a darker secret—one that has haunted her for 14 years. Then a news headline from 1876 sparks inspiration: Missing Dressmakers Believed to be Murdered. Compelled to discover what happened to Hannelore and Margaret, Sarah returns to her roots as a journalist. Will her beautiful heirloom engagement ring uncover a connection to Hanna Schaeffer?

Meredith Jaeger was born and raised in the San Francisco Bay Area, the daughter of a Swiss father and an American mother. While working for a San Francisco start-up, Meredith fulfilled her dream of writing a novel, the result of which was The Dressmaker,s Dowry. Meredith lives in Alameda with her husband, their infant daughter, and their bulldog.

This was a delightful diversion for me from my more involved and darker reads – not that a book with the themes that this one uses doesn’t involve some dark acts. It just doesn’t delve into them too deeply. Our heroine, Sarah is married to the man of her dreams and in the middle of writing a novel for her thesis but it’s not all going that well for she is keeping a big secret from her husband and her novel is going nowhere. As she continues her research into San Francisco’s less than savory past she stumbles upon an intriguing headline of two dressmakers who went missing. Little does she know where this one small tidbit of history will lead her.

Sarah is a young woman who has come up from nothing to marry into one of the wealthiest families in the San Francisco area. Her husband is nothing liker her cold father in law. While her mother in law welcomes her into the family she never quite feels as if she belongs. She somehow feels adrift until she stumbles upon the story of the two missing seamstresses. Once she decides to investigate their story instead of writing her novel everything changes; she feels alive again but she also starts to receive threatening messages.  Why? From whom?

This was a book that entertained me, gave me a look into San Francisco’s dark history and let me escape for a while. It’s not a book that required a lot of thought and to be honest it’s better if you don’t think too hard while reading it. It’s an escapist piece of reading and well suited to that realm. I’d pick up another book by the author without hesitation for an enjoyable afternoon’s reading

Share
Tweet
Yum
Share
Pin
Email
Meredith JaegerThe Dressmaker's Dowry
Winter Feral Cat Care- Setting Up an Outside Shelter
What is an Oya? It Helps Save Water and Time in Your Garden