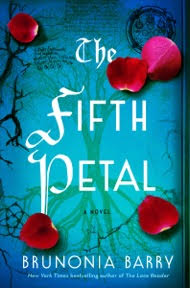 “Do you think, inside, every one of us is a killer?”

This is the question that haunts the people of Salem, Massachusetts, in Brunonia Barry’s spellbinding, masterful new thriller, THE FIFTH PETAL (January 24, 2017; Crown), a tale of otherworldly powers, ancient myths, and a gruesome triple homicide. Ten years after her New York Times bestselling debut novel THE LACE READER became an international sensation, Barry revisits contemporary Salem, where the dark history of the paranormal continues to reverberate in the lives of the Whitney family and their neighbors. With its release, THE LACE READER became an overnight success, winning numerous awards and rave reviews from the New York Times, Washington Post, Time, New York, People, and being named an Amazon Best Book of the Month. Barry, born and raised in Salem, now returns with a complex brew of suspense, seduction, and murder in her highly anticipated novel THE FIFTH PETAL.

When a teenage boy dies suspiciously on Halloween night, Salem’s chief of police, John Rafferty, now married to gifted lace reader Towner Whitney, wonders if there is a connection between his death and Salem’s most notorious cold case, “The Goddess Murders,” in which three young women, all descended from accused Salem witches, were slashed on Halloween night in 1989. Now Rafferty must uncover who, or what, is killing the descendants of Salem’s accused witches, while keeping the town’s paranoia—all too similar to the hysteria that lead to the infamous witch trials—at bay.

As Rafferty begins to uncover a dark chapter of Salem’s past, he finds unexpected help from Callie Cahill, the daughter of one of the Goddess victims, who has recently returned to town. Discovered at the scene of the crime when she was five years old, Callie survived the mysterious massacre with only scratches on her arms and a perfect stigmata of a five-petal rose in the palm of her bloodied hand. Now Callie, who has always been gifted with premonitions, begins to struggle with visions she doesn’t quite understand and an attraction to a man who has unknown connections to her mother’s murder. Neither Rafferty nor Callie believes the main suspect, Rose Whelan, respected local historian and honorary aunt to Callie, is guilty of murder or witchcraft. But clearing Rose’s name might mean crossing paths with a dangerous force. Were the women victims of an all-too-human vengeance, or was the devil raised in Salem that night? And if Rafferty and Callie can’t discover what happened that night, will evil rise again?

Brunonia Barry is the New York Times and international best selling author of The Lace Reader and The Map of True Places. Her work has been translated into more than thirty languages. She was the first American author to win the International Women’s Fiction Festival’s Baccante Award and was a past recipient of Ragdale Artists’ Colony’s Strnad Fellowship as well as the winner of New England Book Festival’s award for Best Fiction and Amazon’s Best of the Month. Her reviews and articles on writing have appeared in The London Times and The Washington Post. Brunonia co-chairs the Salem Athenaeum’s Writers’ Committee. She lives in Salem with her husband Gary Ward and their dog, Angel. Her new novel, The Fifth Petal will be released in January 2017.

I did not read the first book in this series, The Lace Reader, but I didn’t feel lost within the pages of The Fifth Petal. As with most serials though, I suspect that I would appreciate certain things more if I had read the first book. I honestly didn’t know this was a continuation when I requested it – I was honestly just in love with the cover. It’s odd how that is sometimes.

The book is a mix of history, mystery, fantasy and thriller – all on the light side. The book begins with murders that happened in 1989 that were never solved. The survivors, Rose Whelan and a little girl named Callie were traumatized. Rose has lived on the edges of society since, practically homeless and talking to the trees. Callie was taken away by the nuns and not heard from again.

As history starts to repeat itself with another unexplained murder in Rose’s presence the town starts calling for her blood. The new police chief starts to investigate the old murders as he is convinced that Rose could not possibly have committed them. An adult Callie, living in a nearby town reads about the latest contretemps and realizes that Rose is not dead as she was told. She rushes back to Salem to help care for her.  But will the police chief’s support and Callie’s presence be enough to save Rose?

I’m mixed on this book. I did enjoy it. The whole Salem witch story aspect is fascinating, the townspeople and their rabid reactions (in the book) were so like the madness of the witch hunt itself. I found Callie’s music therapy to be very interesting but I really don’t know how or why it fit into this story beyond her using it for one very specific purpose. Her romance was delightful to a point but the side trip to Italy seemed like it belonged in another book. I kept wondering what was going to happen that would be relevant to the story and the answer was – nothing. I can only assume that those chapters are a set up for the next book.

After all the set up the finale came hard  and fast with little time for the reader to really understand what the devil was going on. It’s not a short book yet the ending seemed rushed and this was a bit disappointing after the build up. Despite all of this I did find the characters very diverting and I would read about them again. I’d like to read The Lace Reader and I’ll certainly pick up the next book in the series.

One US reader will win a copy of The Fifth Petal. Just enter as many ways as you would like on the Gleam widget below. Full rules are on the widget. Good luck everyone.