I am happy to be part of the excerpt tour for Sherryl Woods’ new book, Lilac Lane with TLC Book Tours. After you read this, the book details follow and then you can find out about a great sweepstakes where you can win a trip to Colonial Beach, Virginia. 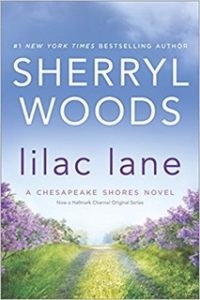 Luke walked into his house on Beach Lane well after midnight, expecting to find his wife and daughter sound asleep as they usually were. Instead, he opened the door to discover the soft glow of dozens of candles and his wife wearing one of those shimmery gowns that skimmed over her curves and never failed to cause a hitch in his breath in the few seconds before he managed to get it off her. Suspicion warred with heat, but as usual the heat won. With his gaze locked with hers, he tried to assess the glint
in her eyes as he crossed the room and accepted the glass of champagne she held out to him. “It’s been a while since I’ve had a welcome like this at the end of the day,” he murmured, his gaze drifting to the swell of her breast where the gown had dipped low. “And it’s long overdue, it is,” Moira said, her voice soft and filled with promise. She pushed him back against the cushions of the sofa and settled snugly against him. “I’ve missed our time like this. Haven’t you?” “It’s not as if our love life has been lacking,” he commented in a choked voice as her hand tugged his T-shirt free and slipped below to caress bare skin. “Not lacking for sure,” she conceded. “But less spontaneous. You can’t deny that. With our schedules so demanding, we practically need an appointment to have a moment like this.”

“And you’ve been missing the spontaneity?”

“Old married couples need an occasional spark to liven things up,” she said, and managed to say it with a straight face. As intrigued as he was by where this was heading, Luke couldn’t seem to stop the laugh that bubbled up. “Old married couple? Is that how you’re thinking of us these days? When did we both turn gray and start hobbling around? In my opinion, we’ve barely left the honeymoon phase.”
She frowned at his teasing. “If you’re not interested after I’ve gone to all this trouble,” she huffed in typical Moira fashion. She’d always been too quick to take offense. He brushed a wayward strand of hair from her cheek. “I am always interested in you,” he contradicted. “And will be until the day I die. However, Moira, my love, I know you a bit too well to take this seduction at face value. You have something on your mind. Out with that and then we’ll get to the rest of the evening as you’ve planned it.”

She looked as if she wanted to argue, but in the end she sighed and sat back, then took a healthy gulp of her champagne. Since Moira rarely indulged in alcohol, Luke figured whatever she was about to tell him was likely to be something she knew he wasn’t going to want to hear. “It’s about my mum,” she confessed. Luke’s antenna went on full alert. He and Kiera had called a tentative truce since he’d married her daughter, but they weren’t exactly close. And though he sympathized with what she must be going through since Peter McDonough’s unexpected and sudden death, he couldn’t imagine what that had to do with him. “I was with Nell and my grandfather earlier,” Moira continued. “So they’re involved in is, too?” he asked, his antenna now waving as if there were a dozen signals coming at him all at once, none of them boding well. If his grandmother was involved, there was a very good chance it involved the sort of sneaky meddling that terrified everyone in the family. The only person even better at it was his uncle Mick O’Brien. Thankfully, so far his name hadn’t come up. “Just tell me,” he instructed his wife. “What are the three of you conspiring about when it comes to your mother, and what could it possibly have to do with me?” Moira leaned toward him, her expression earnest. “You know how devastated she was by Peter’s death. We think she needs a change of scenery if she’s not to go back to her old ways.”

“You know, retreating from the world, wallowing in her misery and bitterness,” she explained. “I’ve already heard hints of that when we’ve spoken. She feels betrayed. The walls are going back up. It happened after my dad left. I can’t let her waste the rest of her days being all alone again. She’s still young enough to enjoy a full and happy life, if only she’ll allow it.” Luke recalled how impossible Kiera had been when they’d first met in Ireland.

The only person topping her in that department had been the woman sitting right here with him, her skin glowing, the strap on her gown sliding provocatively low, and her voice filled with passion, albeit of an entirely different sort than when he’d first walked in the door. What sort of idiot was he to have redirected that passion to this conversation? “I’m guessing you three have come up with a solution to save her from herself,” he said warily. “We have,” Moira said enthusiastically. “We think she needs to come here, to be with us, with all of the O’Briens. She needs to be surrounded by family. It’ll show her just how a life is meant to be lived. We’d be setting a good example.” Though Luke desperately wanted to argue, to claim it was a terrible idea to remind Kiera of all the family closeness she’d just lost when Peter died, he couldn’t do it. Despite the flare-ups of old family feuds and conflicts, there was healing power in the O’Brien togetherness. He’d experienced it his entire life. And there was healing magic in Chesapeake Shores, as well. He’d have to be hard-hearted to deny that to Moira’s mother.

“Fine. She’ll come for a visit,” he said. “Why would I object to that? When we built our house, we included a guest suite just for such a visit. When you furnished it, I know you did it to your mother’s
taste, hoping she’d find it comfortable the first time she came. I believe her favorite Irish blessing hangs on a plaque just inside the door.” “She’ll find it welcoming, there’s no doubt of that,” Moira said. “But there’s a bit more. We’re thinking of something a little longer than a quick visit.” And here it comes, Luke thought, barely containing a sigh. “Tell me.” 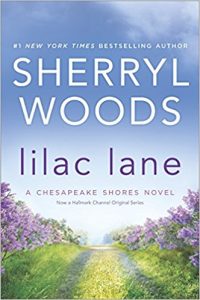 No one writes about friends, family and home better than Sherryl Woods. Told with warmth and humor, Lilac Lane is a brand-new story in her beloved Chesapeake Shores series, one readers all over the world have waited two years to read!

At the heart of Lilac Lane is Keira Malone, who raised her three children alone after her first marriage broke apart, and who, after years of guarding her heart, finally finds love again. But that love is short-lived when her fiancé suffers a fatal heart attack. Grieving and unsure of what’s next, Keira agrees to move from Dublin to Chesapeake Shores, Maryland, to spend time with her daughter, Moira, and her new granddaughter, Kate, as well as to help her son-in-law, Luke, with his Irish pub, O’Briens.

Not wanting to live underfoot, she rents a charming cottage on Lilac Lane, replete with views of the ocean and her neighbor’s thriving garden—not to mention views of the neighbor himself. The neighbor is none other than Bryan Laramie, the brusque and moody chef at the pub, with whom Keira is constantly butting heads. But things get real when Bryan’s long-lost daughter, whom he hasn’t seen since she was a baby, shows up out of the blue. As Bryan and Keira each delve into their pasts, reopening wounds, the rest of the town is gearing up for the Fall Festival Irish Stew cook-off, and making no bones about whose side they’re on. It’s Kitchen Wars meets This is Your Life—a recipe for disaster…or a new take on love?

You won’t want to miss this epic return to Chesapeake Shores, a place we’re betting you’ll want to stay forever.

With her roots firmly planted in the South, Sherryl Woods has written many of her more than 100 books in that distinctive setting, whether in her home state of Virginia, her adopted state, Florida, or her much-adored South Carolina. Sherryl is best known for her ability to creating endearing small town communities and families. She is the New York Times and USA Today bestselling author of over 75 romances for Silhouette Desire and Special Edition. 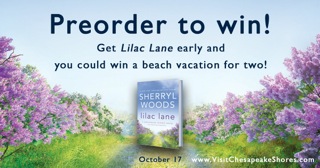