The Doctor of Aleppo by Dan Mayland – Book Spotlight, Guest Post and a Giveaway

I am very pleased to welcome the author of The Doctor of Alleppo, Dan Mayland, to Books, Cooks, Looks today with a very special guest post. Mr. Mayland is on tour with TLC Book Tours. Be sure to follow the tour for additional guest posts, reviews and Instagram features. 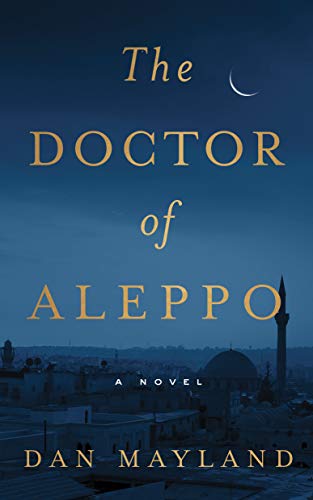 About The Doctor of Aleppo:

In the ancient Silk Road city of Aleppo, a young American woman is sucked into the Syrian civil war engulfing the city. Relentlessly pursued by a Javert-like secret police officer, her only refuge is the rebel hospital run by a renowned surgeon.

In The Doctor of Aleppo, Dan Mayland, author of the bestselling Mark Sava spy novel series, pairs a thriller writer’s sensibilities with a gripping account of good people cruelly trapped in somebody else’s war.

Dan Mayland is an author and professional geopolitical forecaster,helping nonprofit, private, and government organizations navigate a changing world. His Mark Sava spy series and his latest novel, The Doctor of Aleppo, were informed by his experiences in the Caspian region and Middle East. Raised in New Jersey, Mayland now lives in Pennsylvania with his wife and two children, in an old stone farmhouse he and his wife have restored. More information about Dan and his books can be found at danmayland.com.

Many of the most memorable meals I’ve ever eaten have resulted from conducting research for my novels.
The best stew I ever ate, for example, was in Iran—a pomegranate, ground-walnut, and chicken concoction, the key to which was using a pomegranate paste instead of the watery seeds. The resulting impossibly rich, purplish concoction was magnificent. (Give it a Google if you’re interested, it’s called Fesenjān.)
Another meal that was memorable for a much different reason was a can of Pringles eaten outside in 120-degree heat. I’d gone to Bahrain shortly after the Arab Spring erupted, which wouldn’t have been an issue at least from a culinary perspective, but I forgot to take into account that it would be Ramadan on the morning I arrived and so hadn’t fortified myself with an extra hearty pre-dawn breakfast. With restaurants and supermarkets closed for the day, I had to make due for lunch.
For my latest novel, The Doctor of Aleppo, although I conducted research around the Turkey-Syria border, the hands down best meal I ate was in Connecticut of all places. For it was there I met a Syrian family of five who had fled from the war in Aleppo; after hours of interviewing them in their home, they graciously invited me to stay for dinner. An abundance of delicious home-cooked food soon appeared, but what I remember most was the divine—and I don’t use that adjective lightly—labanieh, a hearty yogurt-and-garlic soup marked by hints of mint and lemon and served, in this case, over lamb, dumpling-esque kibbeh balls. Look for a reference to it in chapter four of The Doctor of Aleppo.

One lucky US reader will win a copy of The Doctor of Aleppo. Just enter as many ways as you would like on the Gleam widget below. Full rules are on the widget. Good luck everyone!