I am always glad to find a light read in my schedule. Sometimes I like to get away from history or heavy topics. I thank TLC Book Tours for sending me a copy of The Moonglow Sisters by Lori Wilde at no charge for my honest review. 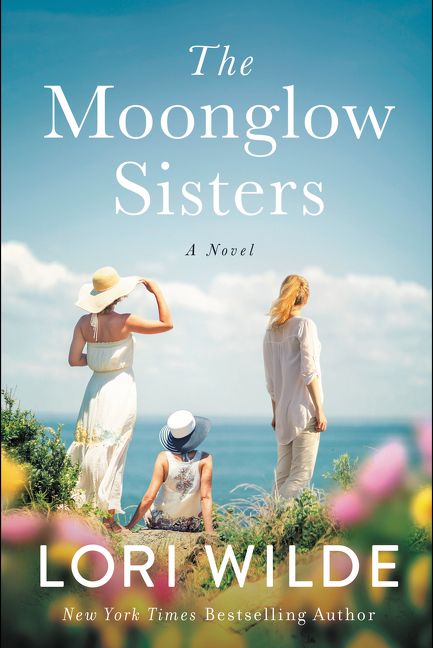 About The Moonglow Sisters:

Welcome to Moonglow Cove, Texas, a place where your neighbors know your name and the gentle waves of the Gulf of Mexico lap lazily against the sands. It’s a magical spot, especially in the summertime…

Once the town was the home of the Clark sisters—brought up by their grandmother at the Moonglow Inn. Nicknamed “The Moonglow Sisters”, as children they were inseparable.  Then, a wedding-day betrayal tore them apart and they scattered across the globe and away from each other.  But the sisters have at last come home…

There’s Maddie: smart, sensible, and stubborn. Shelley, who ran off to find her bliss. And Gia, a free-spirit determined to keep the peace. It’s her impending wedding that keeps them together…but Gia has a secret, and when her sisters find out all heck is going to break loose!

You can purchase The Moonglow Sisters at Harper Collins

Lori Wilde is the New York Times, USA Today and Publishers’ Weekly bestselling author of 87 works of romantic fiction. She’s a three-time Romance Writers’ of America RITA finalist and has four times been nominated for Romantic Times Readers’ Choice Award. She has won numerous other awards as well. Her books have been translated into 26 languages, with more than four million copies of her books sold worldwide. Her breakout novel, The First Love Cookie Club, has been optioned for a TV movie.

Lori is a registered nurse with a BSN from Texas Christian University. She holds a certificate in forensics and is also a certified yoga instructor.

A fifth-generation Texan, Lori lives with her husband, Bill, in the Cutting Horse Capital of the World; where they run Epiphany Orchards, a writing/creativity retreat for the care and enrichment of the artistic soul.

As the book opens we learn of the three Moonglow sisters and how, at one time they were to tight that nothing could come between them. But then something did. That something was “the incident with Raoul” which is always presented in italics and I swear each and every time I saw it I pictured the characters doing a spit take with dramatic music playing.

This “incident” drove the sisters apart; Madison went off to New York to become a famous Martha Stewart like TV personality. Shelley went to Costa Rica to find herself and Gia stayed in Moonglow Cove with her grandmother who owns the Moonglow Inn. But now Grammy has a brain tumor and she wants the girls she raised as her own to come back and heal their rift. They used to quilt together and they left a quilt unfinished. In a letter to Gia she has instructed her to get them all to finish the quilt and forgive each other. Easy, right – because, “the incident with Raoul.”

The whole family is keeping secrets but as they worry about their grandmother the girls work towards rebuilding their trust and becoming close again. They need to work together for they find that Grammy too has been keeping secrets – the Inn is almost in forclosure. Will they be able to put all their ill will aside and pull together to save the Inn? Will Grammy survive her brain surgery to see them again?

There are several subplots going on in the book as each sister and Grammy have their own story to tell along with the overarching tale of why the girls’ relationship broke apart. The books hits a myriad of plot points from brain cancer, miscarriage, cults, same sex relationships, sex addiction, quilting, kite building, small town gossips and I am sure I have missed some. It is admittedly a lot to cover in one book and some topics are better dealt with than others.

It was a light and easy read that I finished in one afternoon. It’s the kind of book you take to the beach for an afternoon’s diversion or to sit under a blanket on a rainy day.  You get to know the characters quickly, they are familiar and welcome. There are some surprises along the way but other supposed surprises are patently obvious from the start. It’s rather like a plain milk chocolate bar; delicious and sweet but in need of a little crunch.