Zip Lining in Montana at at Montana Snowbowl 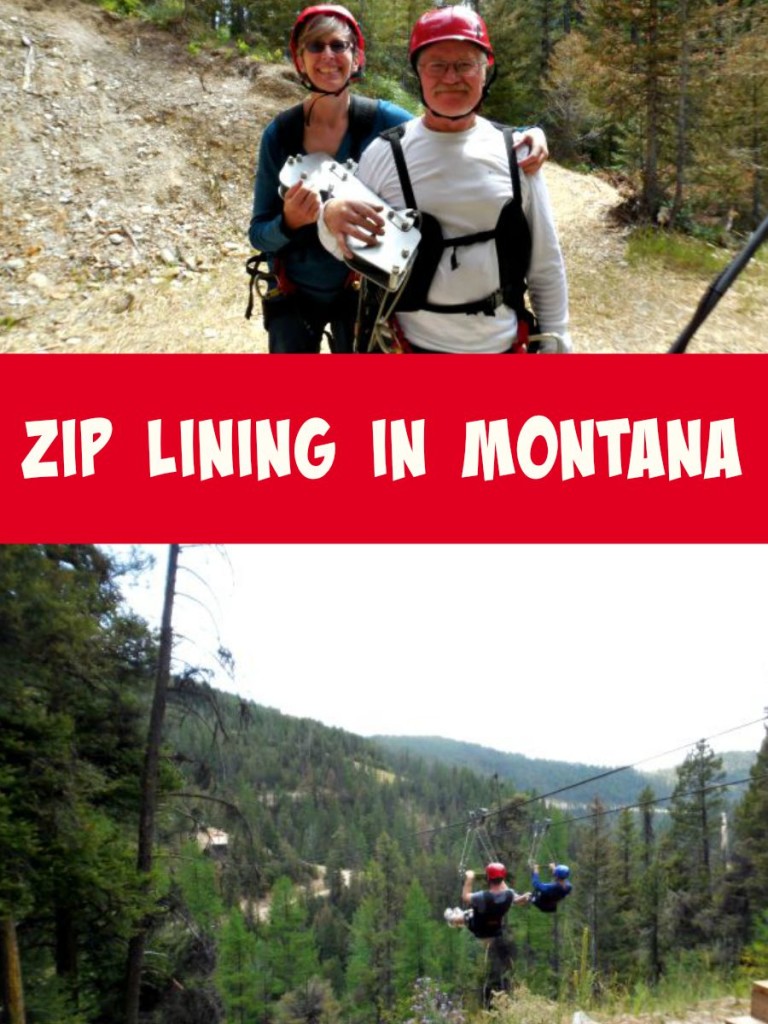 Yesterday was my 56th birthday.

Despite my love of it there was no cake. I was not home to bake it. Instead, the hubby and I were off on an adventure. I decided I wanted to try zip lining.  I am sure if my doctor knew that I was doing this he’d have a fit and I knew it wasn’t the wisest course of action but every once in a blue moon I get a wild hair and push against all the restrictions in my life and want to do something fun.

And it WAS fun. We went to Montana Snowbowl which is not far out of Missoula so it made it an easy trip for us. I mentioned in a previous post that the hubby is back to work so it’s hard for him to be able to get a full day out of town right now. 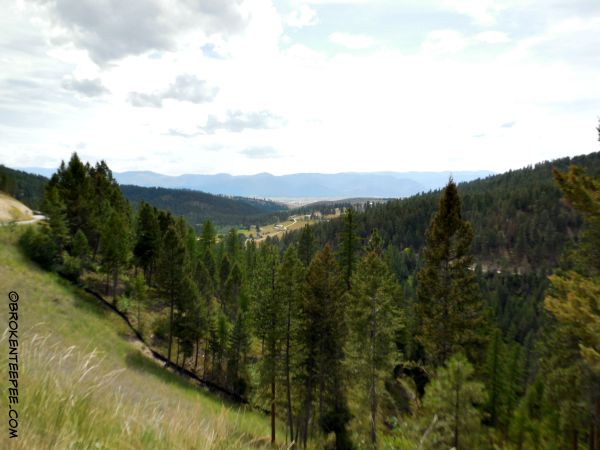 The drive to the mountain was really beautiful; the sun was shining and the skies were clear. We stopped at one point and you could see all the way down to Missoula. Snowbowl is at 7600 feet but we didn’t go quite that high. We got there a little early for our 2:30 appointment so we sat and read a little then we went to sign in. We were put into our harnesses, given our trolleys and given instructions. Then we had a bit of a walk to the first line.

There we had the trial zip to make sure we understood the three moves necessary for a successful trip. Of course the hubby did them all perfectly.

Well, let’s just say that I got two out of three and my landing was less than smooth. I did get it all figured out for the second run.

There was a bit of a hike to the second zip and it taught me just how out of shape I am. Thanks Snowbowl – just what I wanted for my birthday. 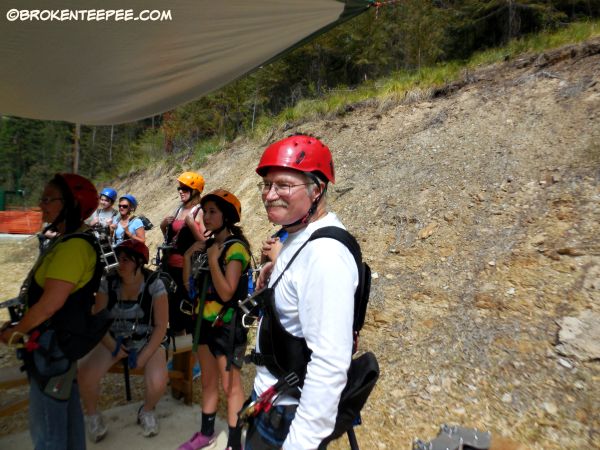 We were a group of 14 and it was interesting; most of the people were from Missoula or its environs. One man had his grandchildren visiting from out of town but other than that it was locals. All ages were represented from pre-teens to 70. We all had a blast. 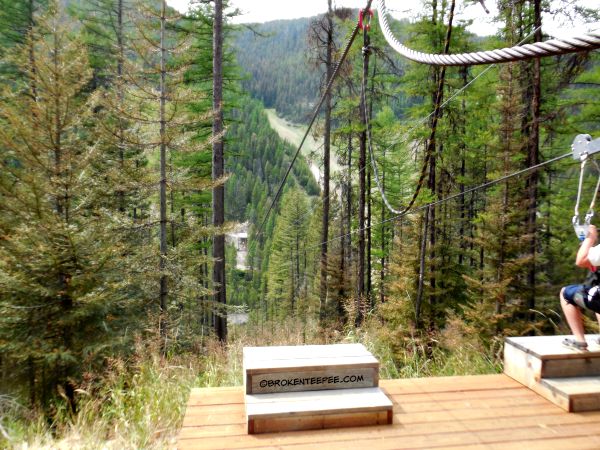 It truly felt like flying. The Snowbowl employees were very friendly and made the outing a lot of fun. They took the time to explain everything and made sure we were comfortable every step of the way. 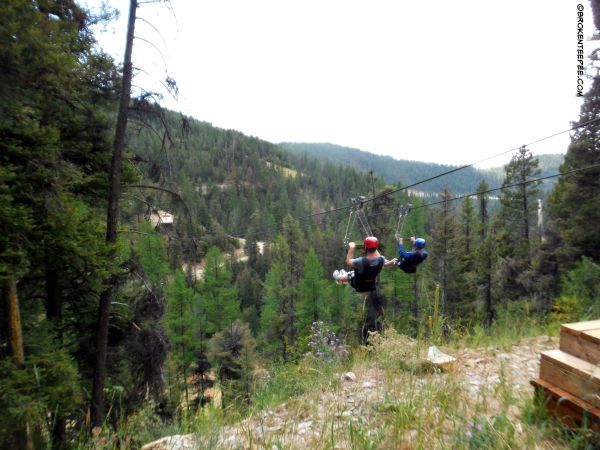 Once you were let go on the line it really, well, zipped – FAST. We were just rushing through the air. I think because it was the first time and it was so new I was so focused on watching the end that I didn’t see as much as I might have – but that’s OK. I still had a blast. 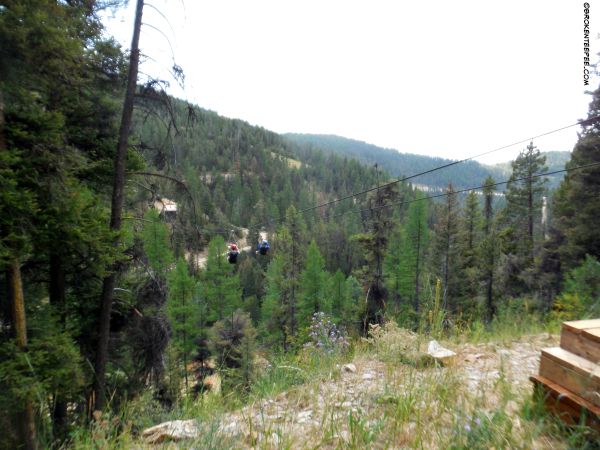 There were, as I mentioned 4 lines. Each one longer than the last with the final one being 900 feet of flying through the forest. The stop at the end of that one was a THUMP! I was laughing so hard every time I hit – it was hysterical. They said they could tell I was having fun. 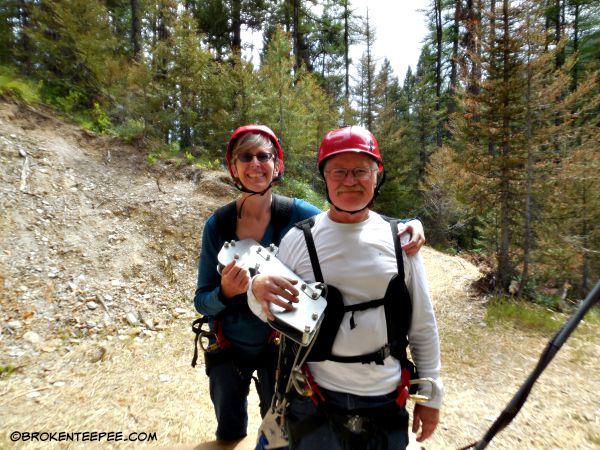 We both enjoyed ourselves which made for a very nice birthday present if you ask me! After the last run we dropped off our gear and then headed back to Missoula for dinner.

We went to a restaurant we’ve been trying to catch open for a while. I think we’ve tried to eat there 3 or 4 times but it was closed. It’s called Iza. I’d had lunch there and it was good but the dinner menu is very different. We were the only ones there when we arrived. The menu looked very interesting and it was hard to choose.

I ordered potsickers and ginger beef and the hubby had salmon. Sadly, after the long wait to eat there the food was only OK. We won’t be going back. For dessert we went to our favorite ice cream place – Big Dipper Ice Cream. I had strawberry with hot fudge and jimmies. It was a perfect way to end a birthday.

Dinner at The Poke Sushi Bowl