I’ve been reviewing books on Broken Teepee since 2013 and in that time I have had the good fortune to read a lot of books. I went back to some of them and culled a list of 100 of my favorites in several genres starting with my favorite – historical fiction. I hope this list proves helpful with the holiday gift giving season arriving this weekend. Giving a book is giving the gift of escape. I could probably add a lot more to this list of 100 best books in fiction from Broken Teepee reviews but there has to be a cut off somewhere. I feel very fortunate to be able to read all of the books I do and to share my thoughts with all of you. 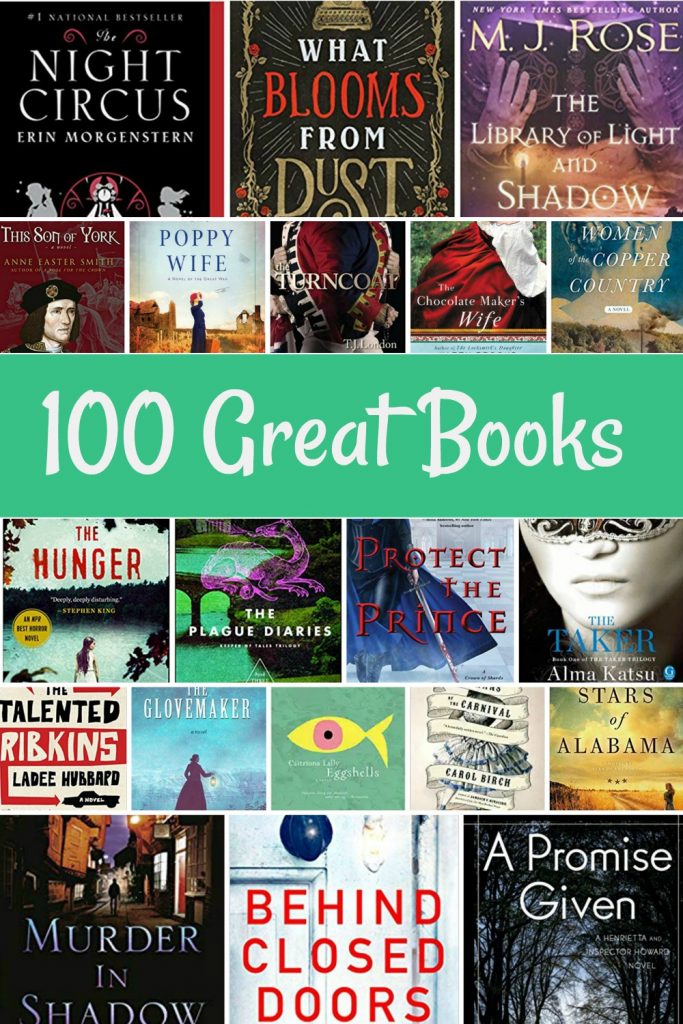 I went back through my reviews and basically chose the books that had 5 star and 4.5 star reviews. I’ve got them broken out by genre but of course there is some cross over. Since I read more historical fiction than anything else that group is the largest. I am trying to broaden my reading and feel I am being successful at that but history just calls to me. The links lead to my reviews and purchase links for all of these books are located on those posts. I do appreciate any purchases you do make through my Amazon link as the commissions are a welcome addition to the bank account. I’ve listed a short synopsis under each title.

In the Shadow of the Storm by Anna Belfrage

Days of Sun and Glory by Anna Belfrage

Under the Approaching Dark by Anna Belfrage

The Cold Light of Dawn by Anna Belfrage

The Queen’s Vow by C.W. Gortner

The Confessions of Catherine de Medici by C.W. Gortner

The Vatican Princess by C.W. Gortner

The Romanov Empress by C.W. Gortner

Portrait of a Conspiracy by Donna Russo Morin

The Competition by Donna Russo Morin

Promised to the Crown by Aimie K. Runyan

The Royal Nanny by Karen Harper

News of the World by Paulette Jiles

A Song of War by Various

The Valley by Brandon Daily

The Life and Times of Persimmon Wilson by Nancy Peacock

The Confessions of Young Nero by Margaret George

The Women in the Castle by Jessica Shattruck

The Nightingale by Kristin Hannah

The Varangian by Bruce McBain

The Most Beautiful Woman in Florence by Alyssa Palombo

The Scribe of Siena by Melodie Winawer

The Lost Season of Love and Snow by Jennifer Laam

The Lost Castle by Kristy Cambron

Between Earth and Sky by Amanda Skenandore

The Undertaker’s Assistant by Amanda Skenandore

The Last Ballad by Wiley Cash

The Impossible Girl by Lydia Kang

The Removes by Tatjana Soli

The Lost Queen by Signe Pike

The Gown by Jennifer Robson

The Eulogist by Terry Gamble

The Turncoat by T.J. London

The Women of Copper Country by Mary Doria Russell

The First Lady and the Rebel by Susan Higginbotham

Madam in Silk by Gini Grossenbacher

Ribbons of Scarlet by Various

The Poppy Wife by Caroline Scott

This Son of York by Anne Easter Smith

Orphans of the Carnival by Carol Birch

The Talented Ribkins by Ladee Hubbard

America for Beginners by Leah Franqui

The River by Starlight by Ellen Notbohm

The Widows by Jess Montgomery

The Glovemaker by Ann Weisgarber

The Promise by Ann Weisgarber

The Personal History of Rachel DuPree by Ann Weisgarber

Valencia and Valentine by Suzy Krause

The Stars of Alabama by Sean Dietrich

Girl Through Glass by Sari Wilson

The Beautiful Possible by Amy Gottlieb

To Lay to Rest Our Ghosts by Caitlin Hamilton Summie

The Keeper of Lost Things by Ruth Hogan

The Art of Inheriting Secrets by Barbara O’Neal

The Almost Sisters by Joshilyn Jackson

The Song of the Jade Lily by Kirsty Manning

The Woman in the White Kimono by Ana Johns

The Glass Ocean by Various

The Lost Daughter by Gill Paul

Behind Closed Doors by B.A. Paris

Murder in Shadow by Anne Cleeland

A Lady in Disguise by Sandra Byrd

A Ring of Truth by Michelle Cox

A Promise Given by Michelle Cox

The Spellbook of Katrina van Tassel  by Alyssa Palombo

The Dream Daughter by Diane Chamberlain

The Witch of Willow Hall by Hester Fox

The Taker by Alma Katsu

The Reckoning by Alma Katsu

The Descent by Alma Katsu

The Mapmaker’s War by Ronlyn Domingue

The Chronicle of Secret Riven by Ronlyn Domingue

The Plague Diaries by Ronlyn Domingue

Protect the Prince by Jennifer Estep

A Torch in His Heart by Anna Belfrage

The Hunger by Alma Katsu

The Night Circus by Erin Morgenstern

The Snow Child by Eowyn Ivey

The Memory Painter by Gwendolyn Womack

The Library of Light and Shadow by M.J. Rose

What Blooms from Dust by James Markert

Midnight at the Tuscany Hotel by James Markert

Once Upon a River by Diane Setterfield

If you are looking for a gift idea for a reader on your list consider a book or even better, one of the series I’ve got listed. It’s such a pain waiting for books to come out to complete a trilogy or more so when they are all out you can present the complete package to your recipient. If they like time travel novels The Graham Saga by Anna Belfrage are delightful, if fantasy is the top of their list The Keeper of Tales trilogy by Ronlyn Domingue is a really awesome series of book. Likewise The Taker Trilogy by Alma Katsu. (I am very much looking forward to Ms. Katsu‘s next book, The Deep)

If you have someone that likes strong women from history then look to the books of C.W. Gortner. He writes about queens and brings them to life. Juliet Grey writes brilliantly about Marie Antoinette and teaches us that she was not the spoiled dilatante that history wrote her to be. The books of Elizabeth Chadwick bring 12th century England alive.

With reading, there is something for everyone. If I find the time I will do a shorter post on non fiction books. I am all for the gift of reading for both adults and children.